Ski-chalet food is just the sort of thing I fancy at this time of year, for two reasons: 1) I've officially decided to give up any pretence of diet or restraint until 2016, and 2) the warm winter evenings and smell of christmas trees remind me of alpine resorts and wonderful gut-busting food to gorge yourself on after a day on the slopes.

In fact, I've never been served anything like this in a ski-chalet - vegetarianism still seems a fairly alien concept in the Alps, and I usually seem to end up eating "beaucoup des frites", (not that I'm complaining).  But if I ran a vegetarian ski chalet, (hey, there's an idea!), it would serve food like these Ski Chalet Buckwheat Galettes.

The inspiration for the filling comes from the traditional French dish 'Tartiflette', which I've never actually eaten in France as it always contains bacon.  But the rest of the ingredients sound so lovely that this is my little nod to it.

I say traditional, but rumour has it that Tartiflette was in fact dreamt up in the 1980s by Reblechon producers, as a way to sell more of their cheese, (the recipe usually contains an entire Reblechon!).

So, my galettes are stuffed with white-wine braised onions, garlic, sliced new potatoes, reblechon cheese and plenty of fresh parsley.  The pancakes themselves are delicious - buckwheat has a wonderfully nutty flavour, and despite its name is not a wheat, and is in fact gluten-free.

Please note: this recipe is not vegan - this blog became vegan in January 2016 and recipes posted before that date may not be vegan. 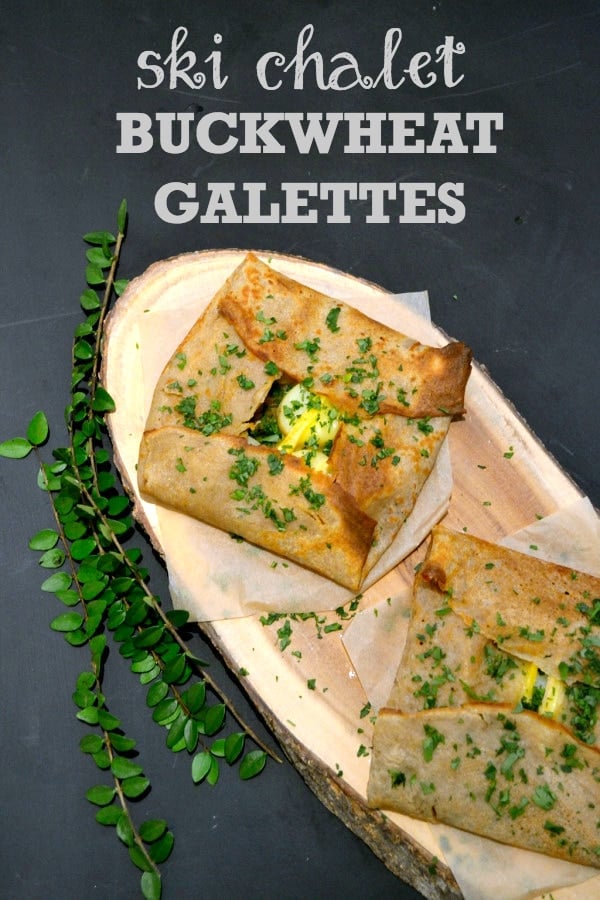 For the buckwheat galettes:

Here are some more buckwheat pancake ideas from blogging friends: