This vegan Christmas pudding is every bit as rich, moist and festive as its non-vegan original version - I bet you won't be able to tell the difference!

What better way to round off a gut-bustingly enormous (vegan) roast dinner with all the trimmings, than a huge slice of boozy steamed fruit pudding with lashings of custard and brandy 'butter'?  Why do we do it?!  Well, because it's a great British tradition of course, and Christmas dinner just wouldn't be the same without it.

'Stir Up Sunday' is fast approaching, and if this is your first vegan Christmas and you thought you might miss out on all the fun - no need! This vegan pudding is every bit as rich, moist and Christmassy as the non-vegan original version - I bet you won't be able to tell the difference.

Here's a quick video showing all my vegan Christmas recipes here on The Veg Space - and you can browse them all in my Christmas Recipe Index too.

For my American readers who are probably totally baffled by now, this pudding is a very traditional part of a British Christmas meal.  Stir Up Sunday is the last Sunday before Advent, and the day on which these puddings are made, with each family member taking a turn to stir the mixture whilst making a wish for the year ahead.  What will yours be?!

And the traditions continue on the big day itself... the pudding should be brought to the table in flames, which is done by pouring over warmed brandy, then setting a match to it.  (Please be careful!!).

A silver coin is traditionally baked into the pudding, and whoever finds it will have good luck for the following year.  In my family, to avoid arguments, we wrap up lots of coins in silver foil (health and safety, you know), and poke them in to the pudding at the last minute.

These are usually 1p or 2p coins, perhaps the occasional 50p, (except for my lovely Uncle Ron who would always come to Christmas Dinner with a crisp £50 note tucked up his sleeve, then pretend to 'find' it in his Christmas pudding every single year to the astonishment of us little ones, until we cottoned on many years later!).

Christmas Pudding is actually very easy to vegan-ise, as the fat content is suet, and vegetable suet is almost always vegan anyway.  As a sponge that's steamed for hours on end, the texture is moist and fairly dense, so replacing the egg is a doddle - you could probably just leave it out of any standard recipe, but I've just added a bit of soya yoghurt here to be on the safe side.  My starting point for this recipe was Felicity Cloake's 'Perfect Christmas Pudding' for the Guardian, but I've vegan-ised it and fiddled about with the quantities a little to my taste.

Mixed fruit is a combination of sultanas, raisins, currants and candied peel. I usually splash out on a 'luxury' version that has glacé cherries in it, but you could just buy the ordinary stuff and add glacé cherries to it - just keep the overall weight at 350g.

Sherry isn't always vegan, so do check labels or consult an app like Barnivore to check which are the best to buy. If you can't find sherry, a Madeira or dessert wine would be lovely, or half and half brandy with water, (on its own it might be a bit much, even for me!).

Vegetable Suet is almost always vegan (a combination of vegetable oils and flour), but do just check the label before buying.

Dairy-free milk and yoghurt I specify soya as it is what I always use in baking - unsweetened. Soya has the highest protein content of any of the plant milks so is the best egg replacer. However anything else will work well too so if you prefer to use oat or nut that's fine.

Stout really gives some wow-factor to your pudding - you won't be able to identify it as such (so don't be put off if you wouldn't order a pint of Guinness at a pub), but is really worth adding. Guinness is vegan, as are many stout ales, but as always, do check the label.

Serve with vegan custard, (I've got a recipe for that!), or brandy 'butter', made with dairy-free block margarine.

What do you serve with yours?

A steamed Christmas Pudding can be stored for up to a year in a cool, dry place sealed in an airtight container. We have been known to have Christmas pudding in the heat of August when we found one just before moving house. Quite a delicious novelty!

To reheat it, you can either steam it again for 1.5 hours, or (quicker and easier), remove all the foil and reheat in the microwave. DO make sure you don't have any coins inside the pudding if you are putting it in the microwave.... we always poke ours into the hot sponge just before serving.

⭐️⭐️⭐️⭐️⭐️ "Made this only a few days out from Christmas and it came out great. Really popular pudding with a non-vegan commenting it’s better than a ‘normal’ pudding. Thanks for a great recipe. Will be making this each year now." Nicola

⭐️⭐️⭐️⭐️⭐️ "Made this for Christmas last year and everyone loved it. Thank you!" Sara

If you're not a fan of rich and boozy fruit puddings to end your Christmas dinner, how about trying one of these instead:

or some of these recipes from blogging friends:

If you liked that... 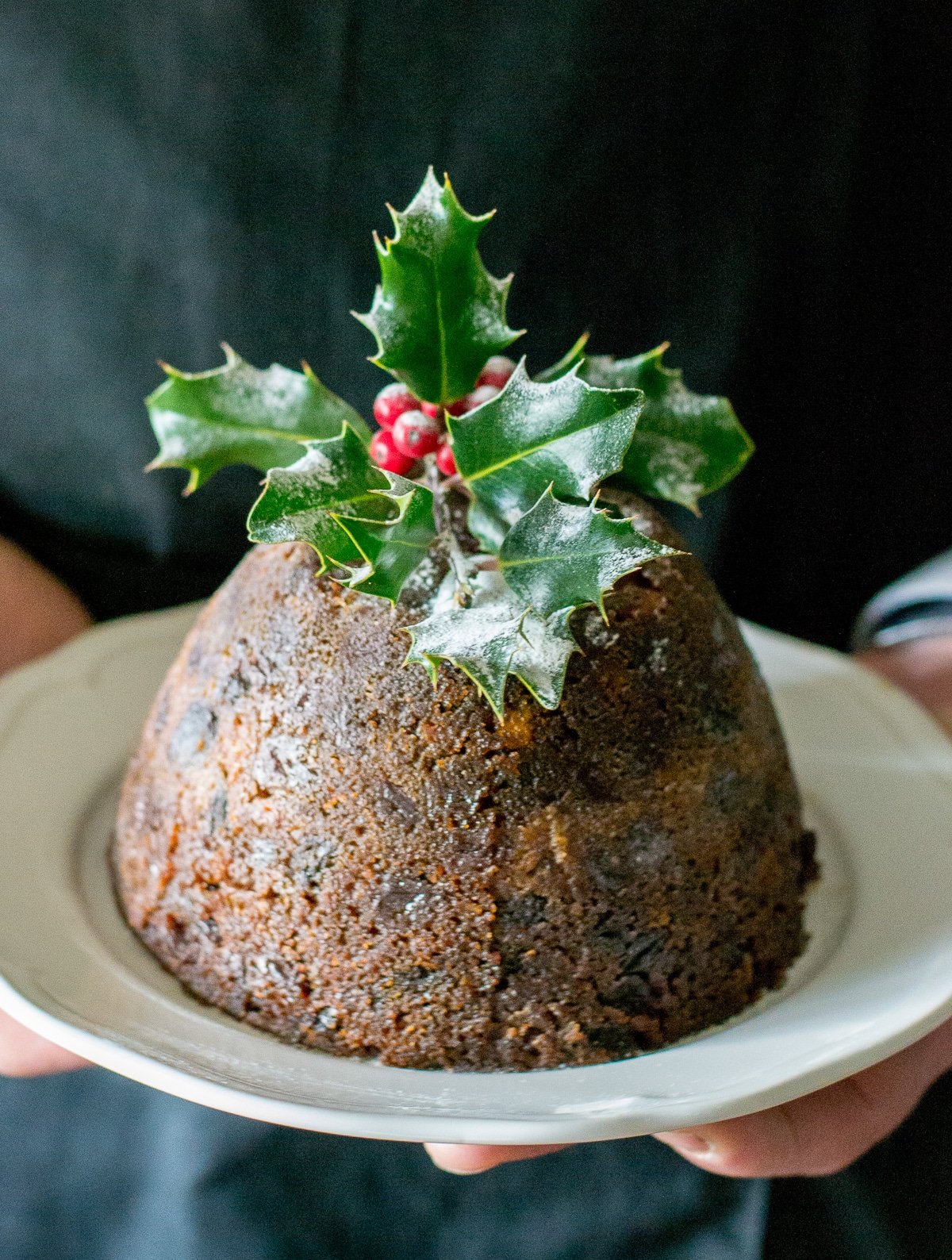