Here's a taste of some recent press coverage about The Veg Space.  For all press enquiries please contact:  kate [at] thevegspace.co.uk 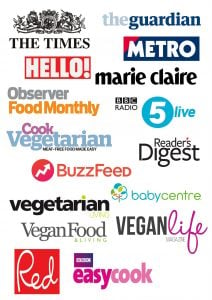 March 2018 Vegetarian Living Magazine How to become a Professional Foodie

January 2017 The Times Magazine - Eat! Supplement How to be a (midweek) vegan - 4-page pull-out supplement featuring 8 recipes from 'Vegan in 15'

January 2017 HELLO! 10 things you need to know about going Vegan according to blogger The Veg Space

January 2017 Metro 31 Vegan Recipes to get you through Veganuary