Waffles - YUM!  I think of them as a very indulgent breakfast option, but in fact they aren't really too high in sugar and fat, (depending on your recipe, of course, and what you choose to put on them!).

The thought of mixing up batter and making them fresh first thing in the morning is lovely, but in our house, not likely to happen, (we're in a 'toddler up before 6am' phase, and dragging some cornflakes into a bowl is about as much as I can muster most days!).  So, I've been experimenting with making up batches of waffles and freezing them, then just popping them straight in the toaster in the morning., topping with fresh fruit, yoghurt and a drizzle of maple syrup.

I also love waffles as a pudding, and below is one of the most 'naughty-but-nice' ideas I've tried.  It sounds like a terrible faff, making waffles and making a plum crumble, but I cheated (!) so it's super-easy and such an awesome dessert if you have friends or family round.

I'll be the first to admit that I always thought a waffle-maker was one of those faddy kitchen gadgets that you might use once or twice, then push to the back of the hardest-to-reach cupboard and forget about until you next move house.  Needless to say, I've never tried using one, but I do absolutely LOVE waffles, so was intrigued and excited when Sage by Heston Blumenthal asked if I would be interested in receiving a No-Mess Waffle Maker to review.

No-Mess? Is waffle-making particularly messy?  Oh yes! Well, it would be without Heston's clever little 'moat' around the edge - you see, the batter has a raising agent in, (baking powder or yeast in Beigian waffles), so unless you pour in precisely the right amount of batter, it expands and oozes out the sides as it cooks.  With any lesser waffle maker, this would end up all over your worktop, but with this super-duper No-Mess version, it pours into a trough, which as well as being neat and tidy provides whoever's cooking with a tasty pre-breakfast treat! (Just to make sure they are OK, you understand).

The No-Mess Waffle Maker also has adjustable browning control, which is particularly useful when I'm making a batch to freeze - you want them slightly under-done as they will get a second toasting when you get them out of the freezer.  I've also found that different recipes brown at very different rates, so keep checking the first of any batch.  I made a vegan waffle using chia seed as an egg-replacer.  Really delicious, (I actually preferred it to the 'Classic Waffle' recipe below so will add in options if you want to try it), but it did need cooking for a little longer to get really crisp. 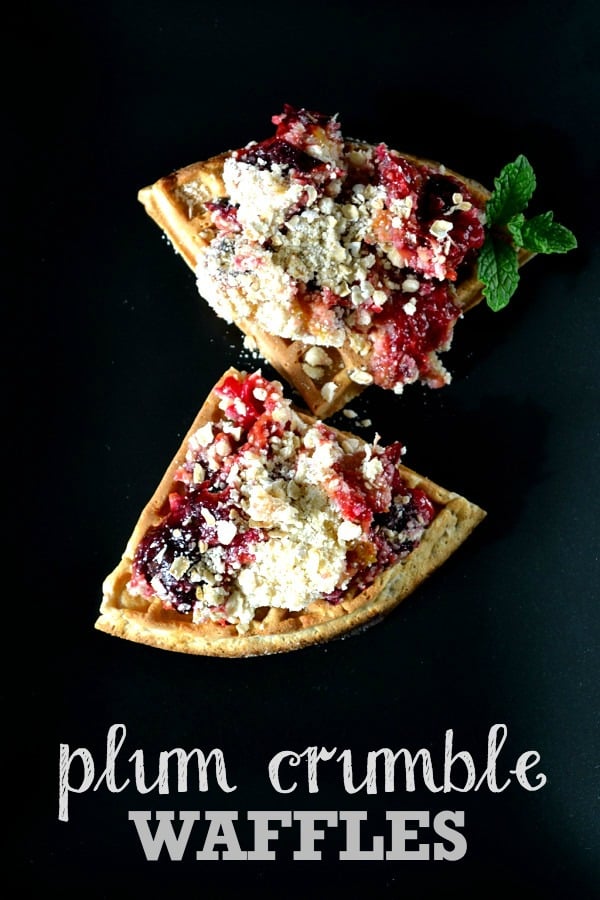 For the quick plum crumble topping:

Disclosure: Sage by Heston Blumenthal sent me a No-Mess Waffle Maker - there was no expectation of a positive review.  This post contains affiliate links.