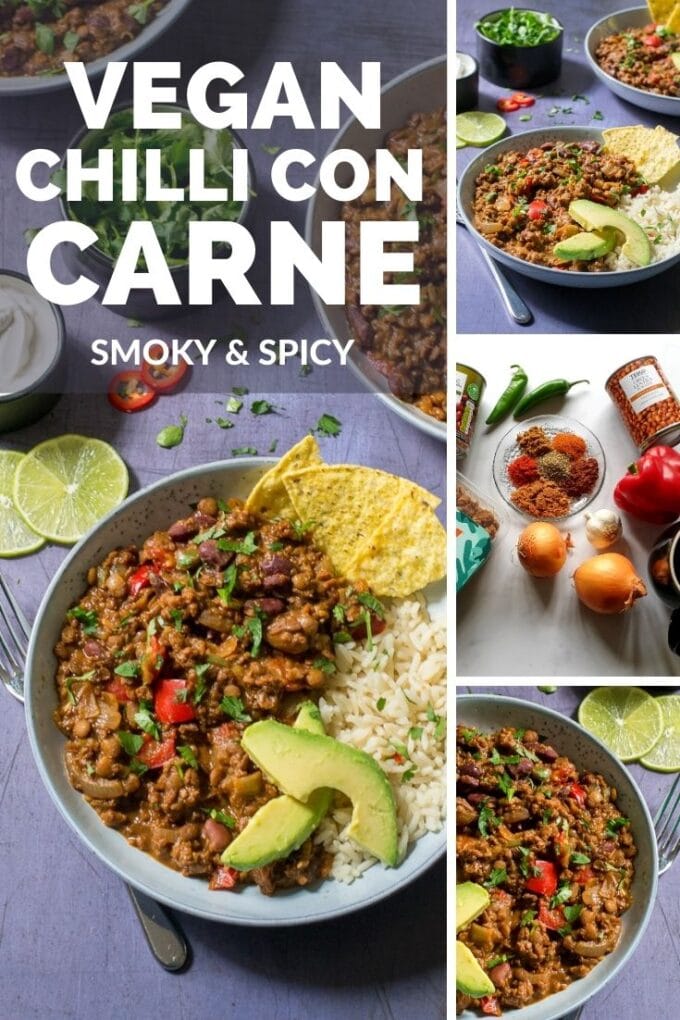 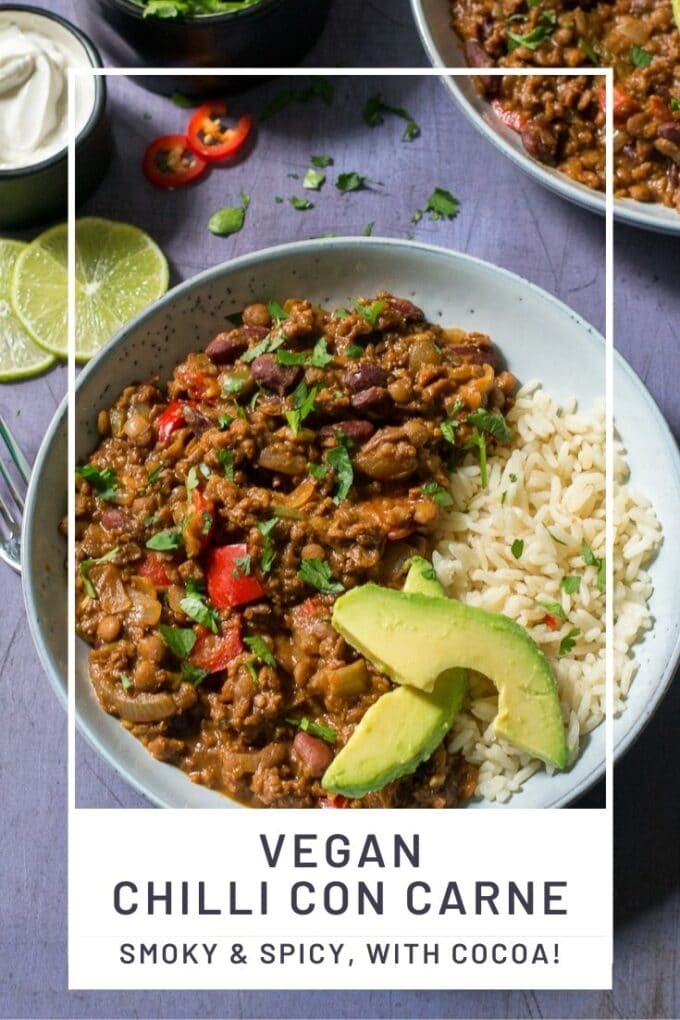 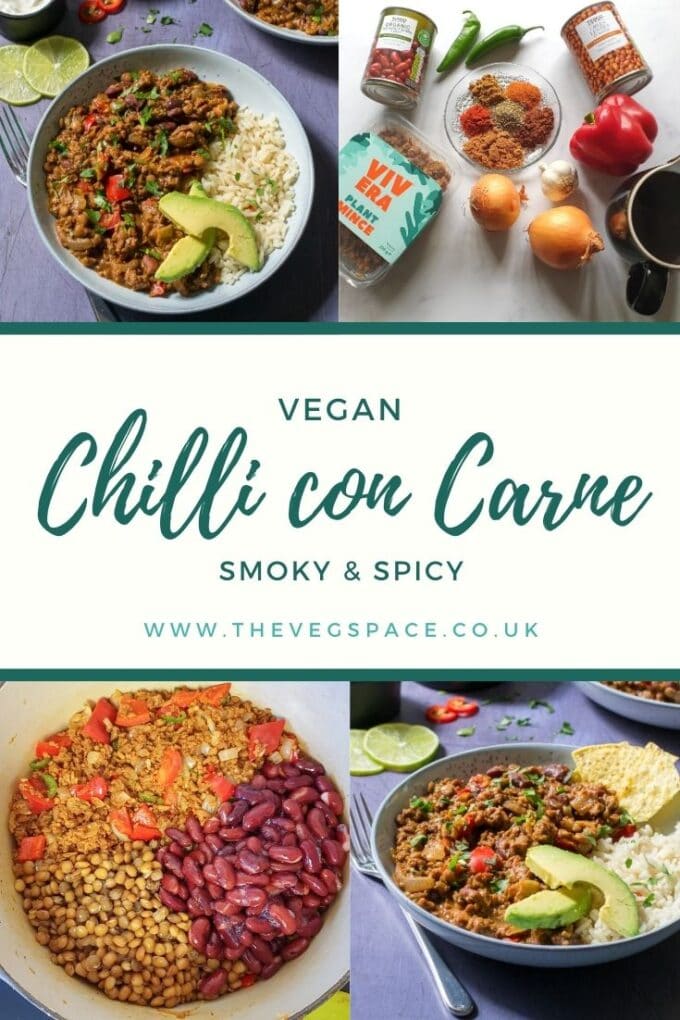 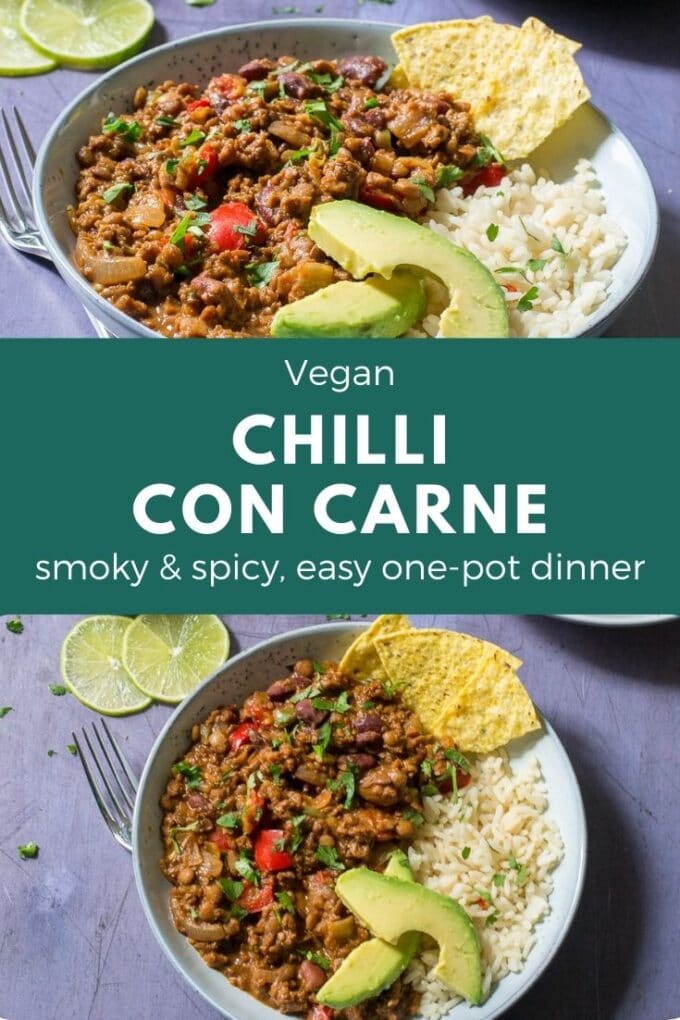 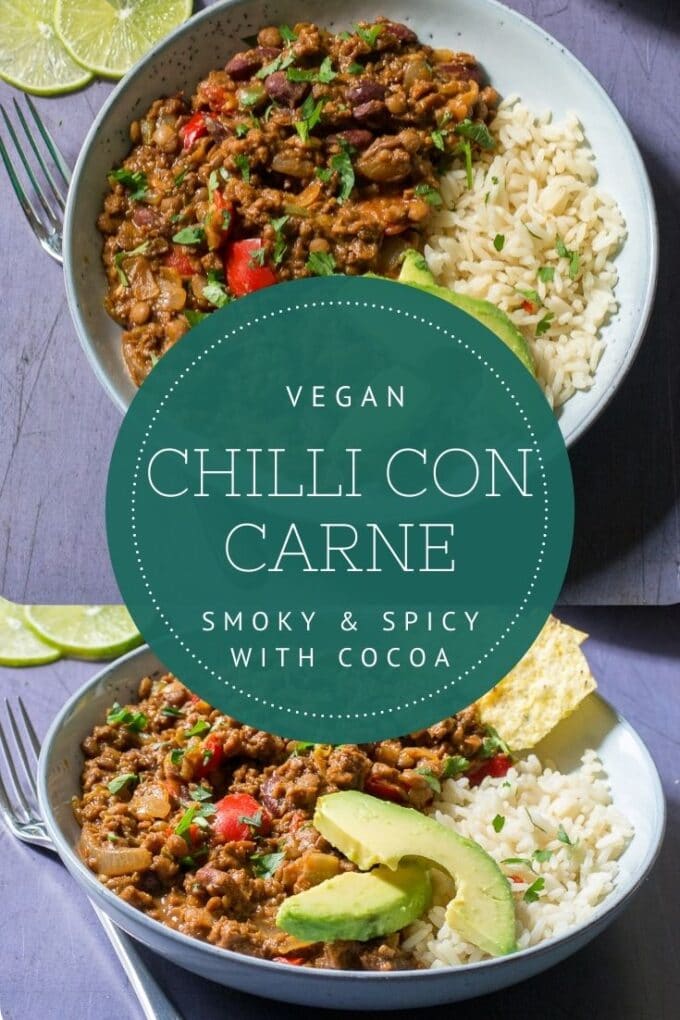 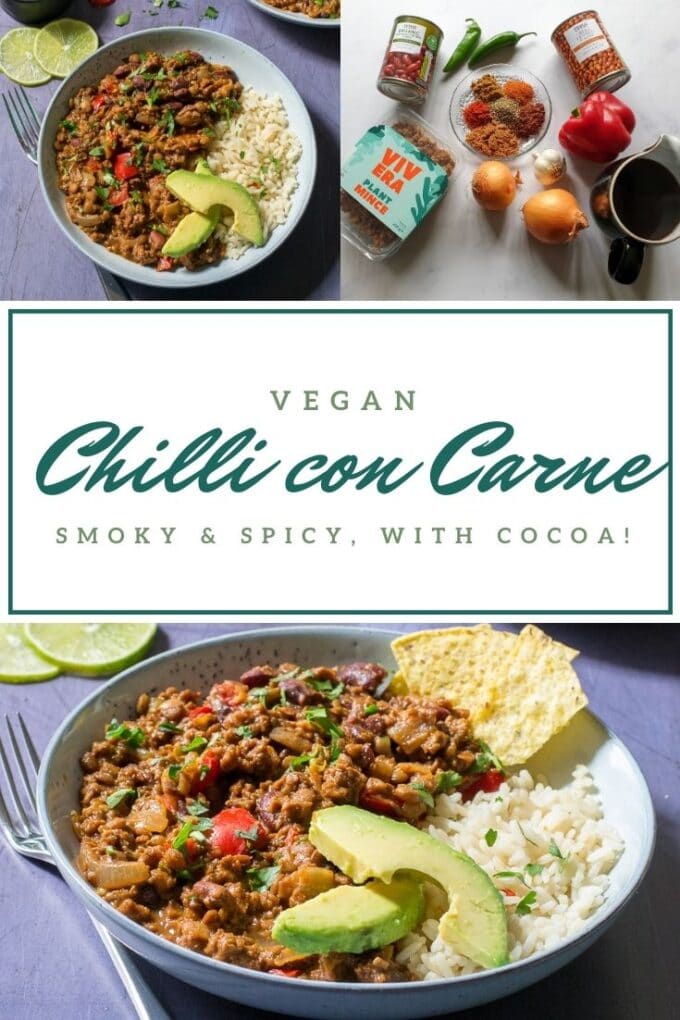 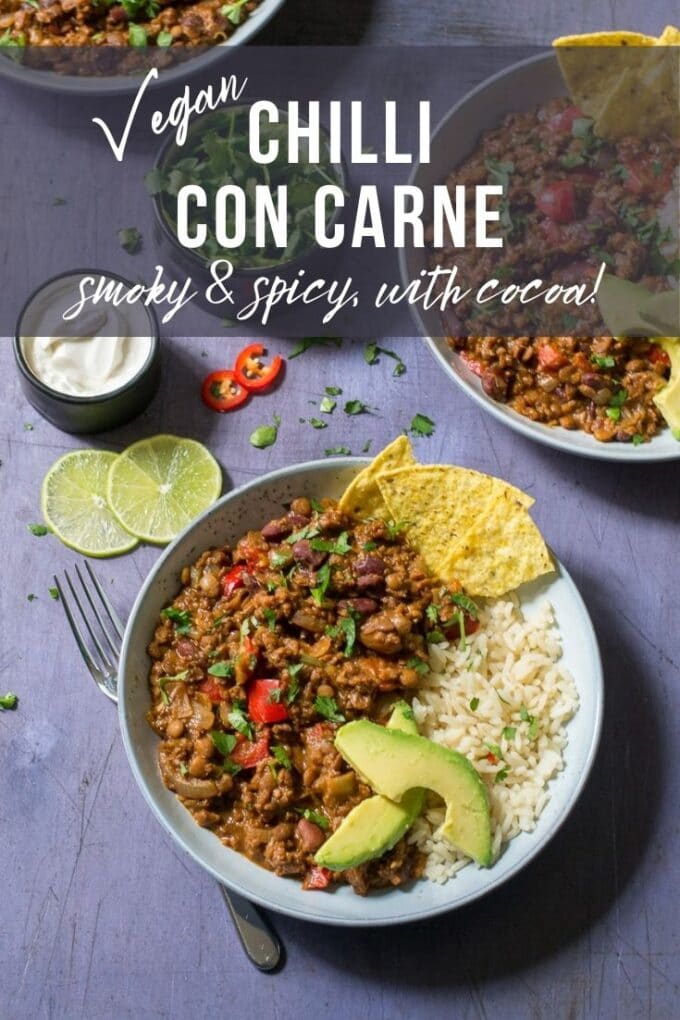 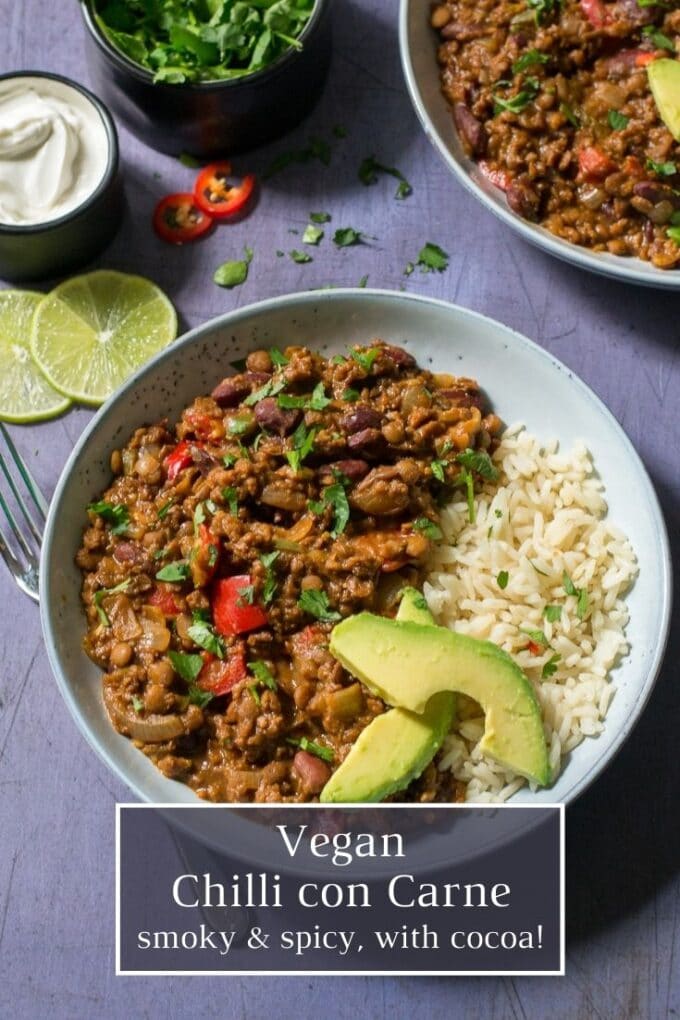 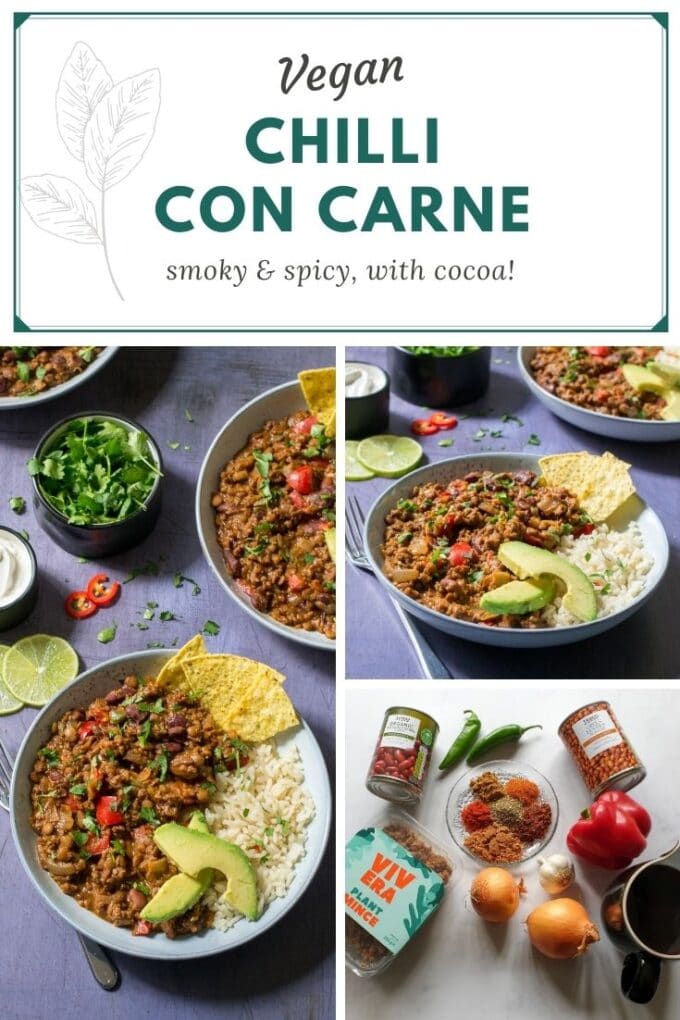 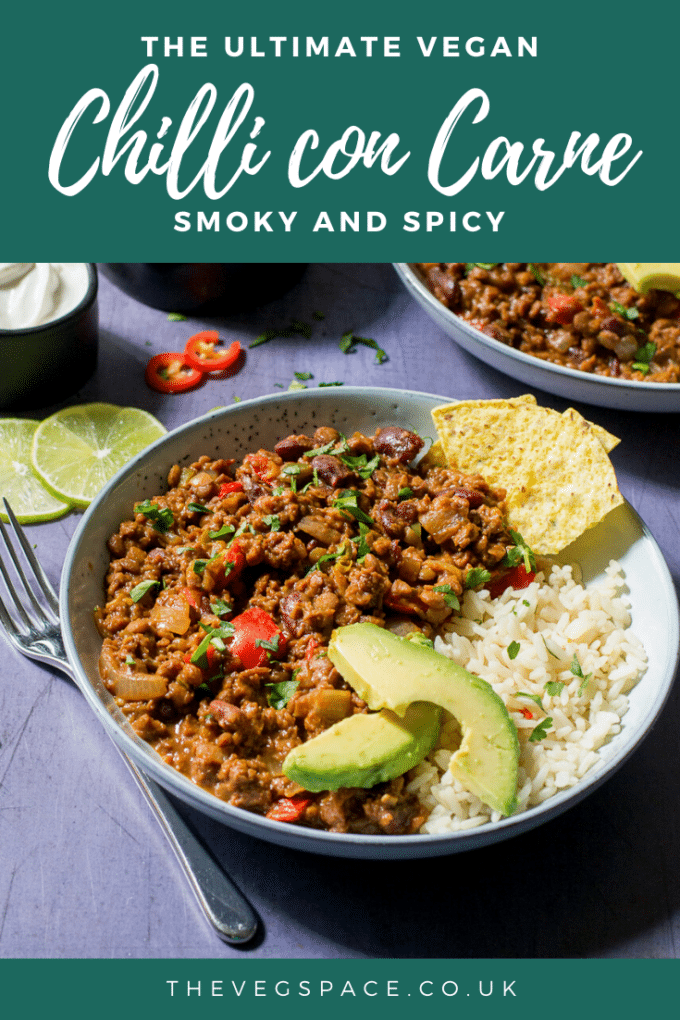 This smoky and spicy vegan chilli con carne features cocoa and coffee to add deep flavours to this Mexican classic.

Fake meat... it's a bit of a 'Marmite' isn't it - you either love it or hate it, eat too much of it or never touch the stuff. It is rare for me to use it in a recipe here on The Veg Space but having cooked a lot of chillis in my time, I find the bite and texture some good quality vegan mince brings to this recipe is really worth it, and encourage you to give it a go even if you're not usually a fan.

I have a staple 'quick chilli' method which often makes its way onto our weekly meal plan, either for fajitas, a chilli & rice bowl like those below, jacket potatoes or even burritos. It goes: fry an onion and pepper, add tinned lentils or mince, add fajita seasoning, add a tin of chopped tomatoes and a bit of water, and cook. It is good, quick and filling, but not what purists would call a chilli.

So I went in search of some 'proper' chilli con carne recipes to turn vegan. I'm a fan of Thomasina Miers' book 'Mexican Food Made Simple'* - not vegan but some brilliantly easy-but-authentic recipes. Some more ideas from Nigella's recipe and Felicity Cloake's brilliant article for the Guardian, and my vegan version began to take shape.

The base of the sauce is not just chopped tomatoes but also fresh black coffee, with a tablespoon of cocoa added too. If you think that sounds like a Starbucks Mocha, think again - it is somehow deeply savoury, a really rich flavour but very different to your bog-standard everyday chilli.

What you need to make your vegan Chilli con Carne

Vegan mince These vary quite a lot in their texture and taste - my personal favourite is Vivera plant mince pictured below with has a very good texture, but I also like Naked Glory mince or the Meatless Farm mince. The cheap supermarket frozen stuff tends to be pretty spongy - not what you're after here, though it is considerably cheaper so I occasionally revert to it if I'm cooking this in big quantities. (If you prefer a chilli without vegan mince, take a look at my Borlotti Bean Chilli instead).

Tinned lentils add a second form of protein and a lovely texture. They bulk out the chilli at a very low cost so if you're making a big batch and don't want to buy more mince, add more lentils instead.

Spices are what really makes this dish - do adjust to your own taste. The chilli powder plus two green chillis gives this a good kick so tone it down if you prefer. And when you've tried my suggested ratios of cumin, smoked paprika, oregano you might like to play around with your own ideas.

Gravy granules are my top-secret chilli ingredient to give a thick, rich, 'beefy', glossy sauce. I've tried the new OXO beef-flavoured vegan stock cubes which are good, and I use them a lot, but I like the extra sheen and thickness that the gravy granules add here.

Chilli is such a versatile staple - you can eat it in:

This keeps really well in the fridge for a few days, (in fact I prefer it when it has sat in the fridge overnight - the flavours mellow somehow).

You can also freeze it, so perfect for making up a double-batch and freezing in individual portions.

I recommend in many of my soup recipes using old margarine tubs to freeze individual portions - they are the perfect size and stack very neatly in the freezer. Don't forget to label and date them, though!

There are plenty of similarly quick and easy recipes in my new book, ‘Vegan in 15'*.

Hop over to Amazon for a look. Thanks for your support!

Please do save this recipe on Pinterest --> --> --> Sharing my posts helps me to keep creating free vegan recipes!

I love hearing from you! Do send me pictures of your very own vegan chilli con carne on:

IF YOU LIKED THAT... 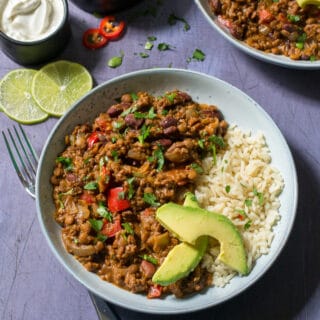 Subscribe to the newsletter so you never miss a new recipe!