I have a bit of a love-hate relationship with mushroom soup.  I can't bear those gloopy tins of 'Cream of Mushroom' soup, thickened with too much cornflour and tasting more of long-life cream than mushroom, with dubious floating chunks which may or may not have begun their life as a mushroom.  But a really deep, earthy homemade mushroom soup with suitably garlicky bread to dunk in is a proper treat, and here I've even splashed in some sherry to make this a soup showstopper.

This could just as easily be a dinner party starter or a simple weeknight supper. The amount of sherry you need to add really depends on a) how alcoholic you like your soup (!), and b) whether you're using a sweet or dry sherry.  Add 2-3 tablespoon first, mix well then taste and keep adding until you're happy.  You should be able to taste it, but don't let it overpower the mushroom-y flavour from those lovely dried porcini, which must be the star of the show.

This is actually a vegan soup, with not a hint of cream required for a luxuriously silky texture.  The trick to this is dividing the soup into two and blitzing half in a blender, then returning it to the pan.  The result is a thickened and silky soup but with plenty of deliciously juicy mushroom chunks to scoop up with your chewy garlic bruschetta croutons.

If you want to serve this as a lunch or supper in its own right, you could make it more filling and substantial by throwing in a handful of pearl barley, puy lentils or even orzo pasta, then simmering until cooked through.

Why not make a loaf of my easy Plaited Bread to serve on the side? 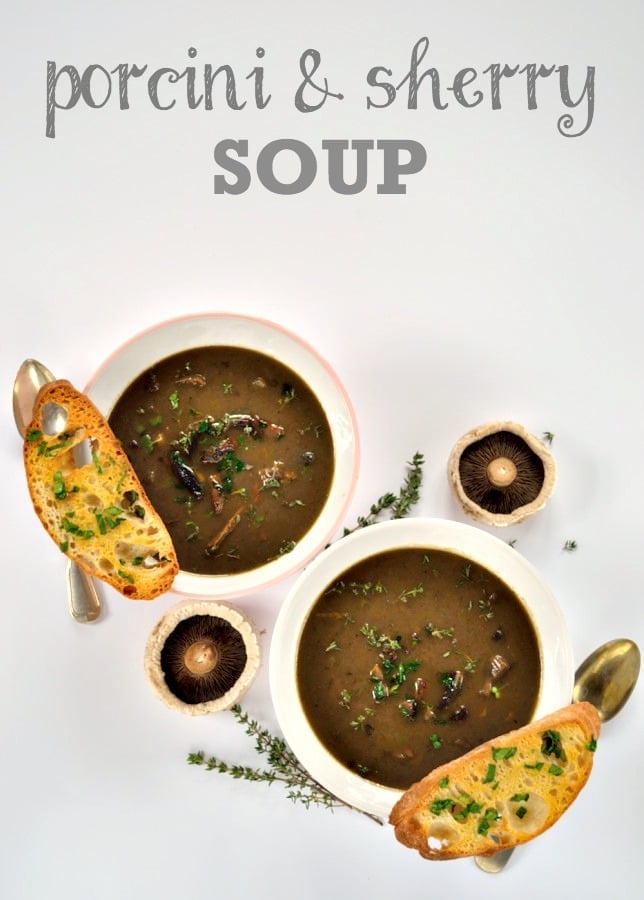