This easy Vegan Yule Log is a light chocolate sponge filled with a fluffy chestnut buttercream. A beautiful festive centrepiece!

Traditional Christmas sweet things tend to involve quite a bit of dried fruit and booze, which isn’t everyone’s cup of tea, but the traditional French Bûche de Noël (Yule Log) is such a treat for all ages.

A light chocolate sponge rolled up with buttercream, (I stirred chestnut purée through mine for an extra festive twist), then covered with yet more buttercream, chocolate this time, and decorated to look like a snowy log.

A traditional swiss roll sponge is made with whisked egg whites, and doesn’t have any fat added.  I’ve been meaning to test out the magic vegan ingredient ‘aquafaba’ (the liquid drained from a tin of chickpeas) as a replacement for egg whites, and hadn’t yet got around to it, so a Bûche de Noël seemed like the perfect opportunity.

The recipe for this did take a few attempts to get right – probably because I hadn’t worked with aquafaba before, (my poor family were subjected to eating multiple vegan yule logs over the course of a few weeks….!). But I think this one is spot on, and is surprisingly easy to make.  The aquafaba really does whip up just like egg whites, and the sponge cooks really quickly.

The chestnut buttercream for the filling is incredibly light and fluffy, whereas the chocolate buttercream ‘sets’ as the melted chocolate hardens, and gives the yule log some rigidity which helps when slicing and serving.

Aquafaba is simply the liquid you drain off from a tin of chickpeas. If you haven’t tried using it as a baking ingredient yet, this recipe is the perfect place to start.  I promise it doesn’t taste of chickpeas at all, (that was one of my main concerns, and put me off using it for ages!), and it really is incredibly easy to use.

Dairy-free yoghurt I tend to use unsweetened soya yoghurt for baking as it has the highest protein content of all the plant yoghurts so is the best egg replacer. But if you can’t have soya or don’t have any to hand, oat or coconut yoghurt will also work here.

Chestnut purée is usually widely available at Christmas time but not so much throughout the rest of the year. It is sold either in tins or in pouches so look out for it in supermarkets. It really makes all the difference to the filling of this yule log so do try to get hold of some if you can.

Let me know how you get on with your own vegan yule log!

There are plenty of similarly quick and easy recipes in my new book, ‘Vegan in 15‘*.

Hop over to Amazon for a look. Thanks for your support!

Please do save this recipe on Pinterest –> –> –> Sharing my posts helps me to keep creating free vegan recipes!

I love hearing from you! Do send me pictures of your very own vegan yule log on:

If you haven’t yet signed up, you can get a regular roundup of all my recipes and giveaways delivered to your inbox absolutely free – just click here to subscribe to The Veg Space monthly newsletter.

IF YOU LIKED THAT…

…. you might also enjoy these vegan recipes from The Veg Space: 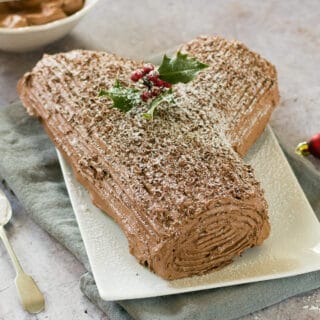 For the Swiss Roll:

For the Swiss Roll:

This website uses cookies to improve your experience while you navigate through the website. Out of these, the cookies that are categorized as necessary are stored on your browser as they are essential for the working of basic functionalities of the website. We also use third-party cookies that help us analyze and understand how you use this website. These cookies will be stored in your browser only with your consent. You also have the option to opt-out of these cookies. But opting out of some of these cookies may affect your browsing experience.
Necessary Always Enabled

Any cookies that may not be particularly necessary for the website to function and is used specifically to collect user personal data via analytics, ads, other embedded contents are termed as non-necessary cookies. It is mandatory to procure user consent prior to running these cookies on your website.