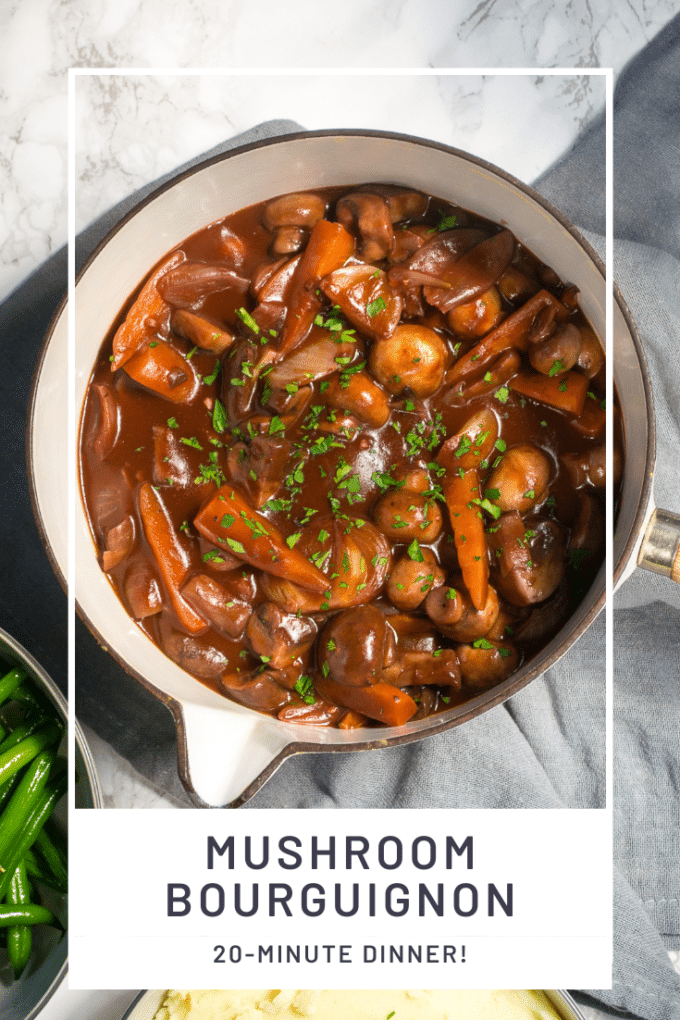 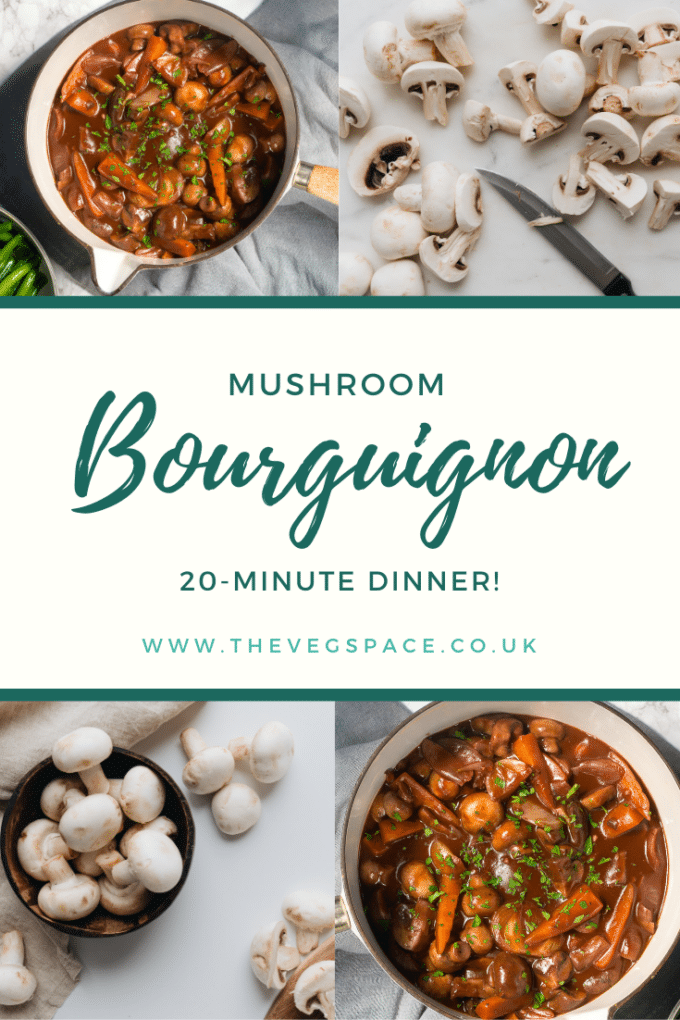 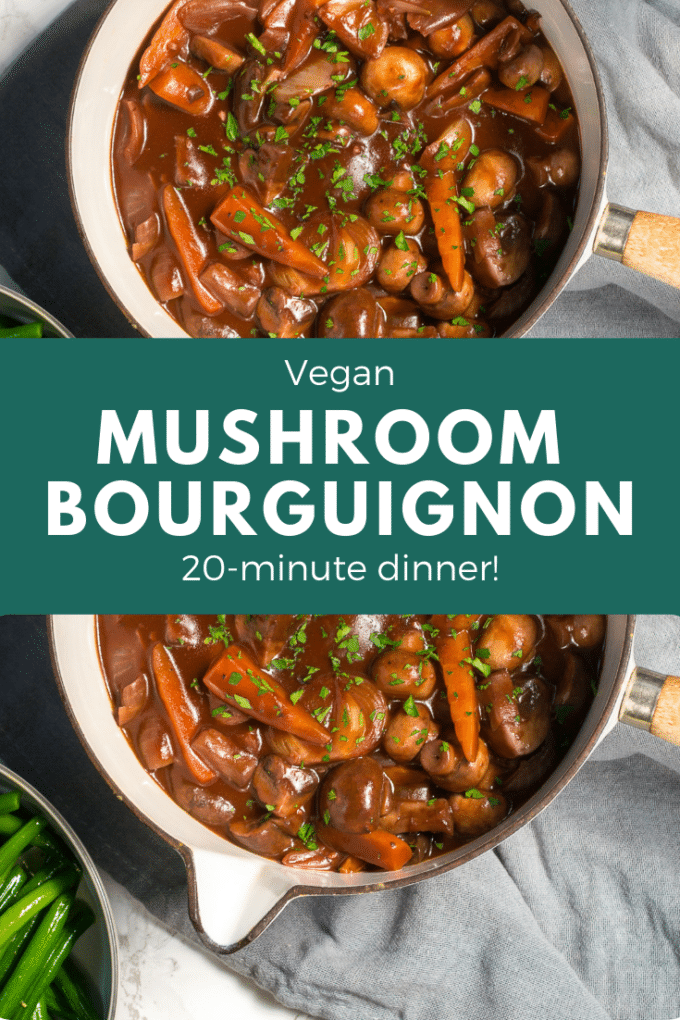 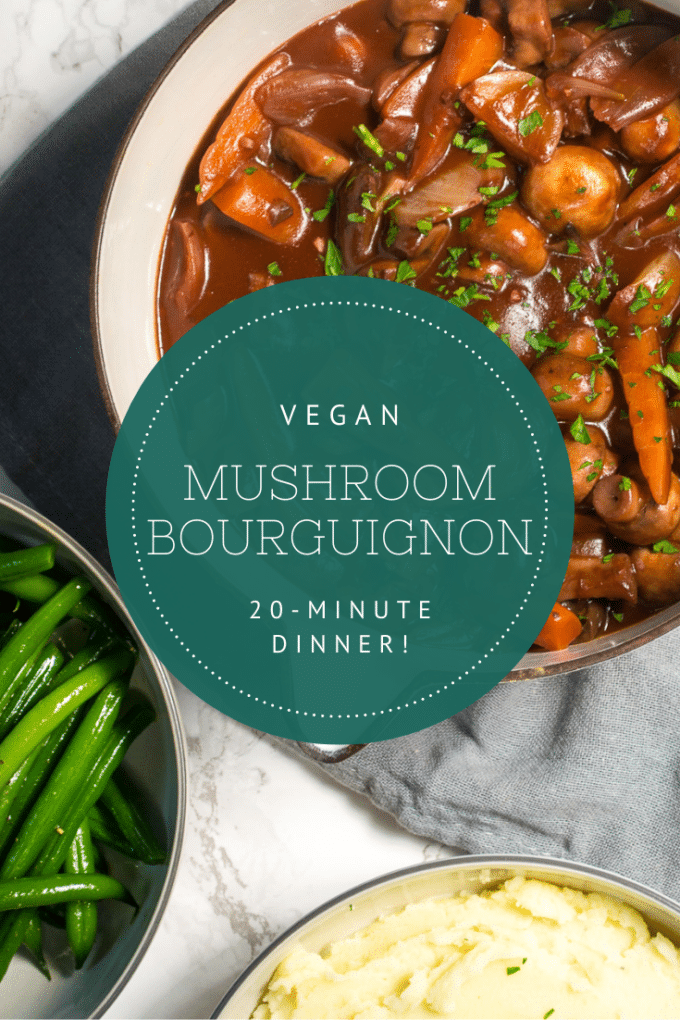 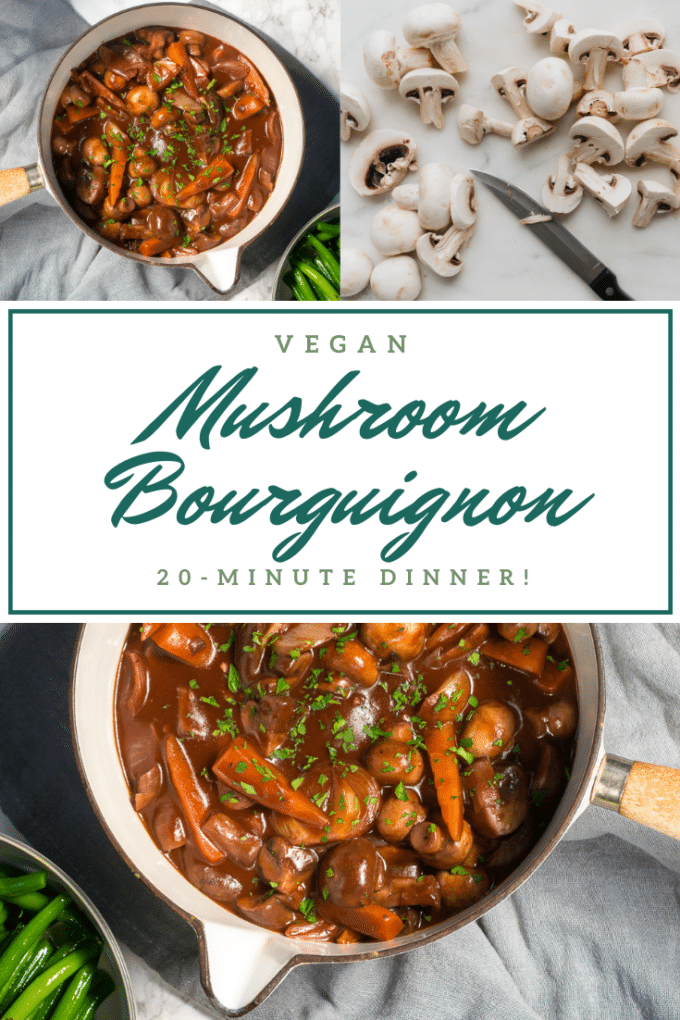 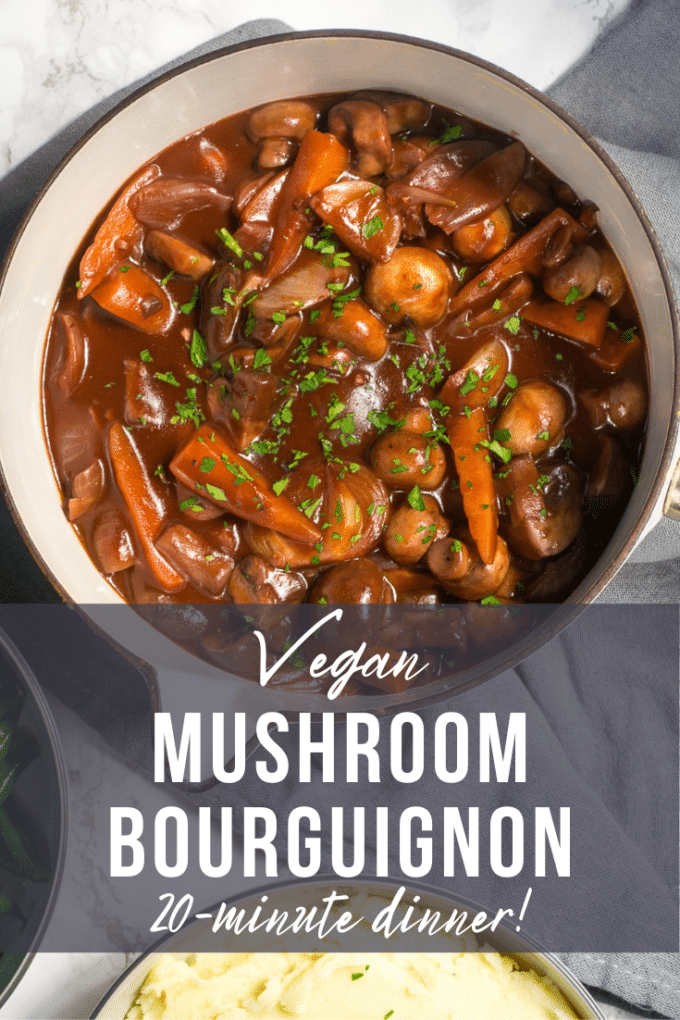 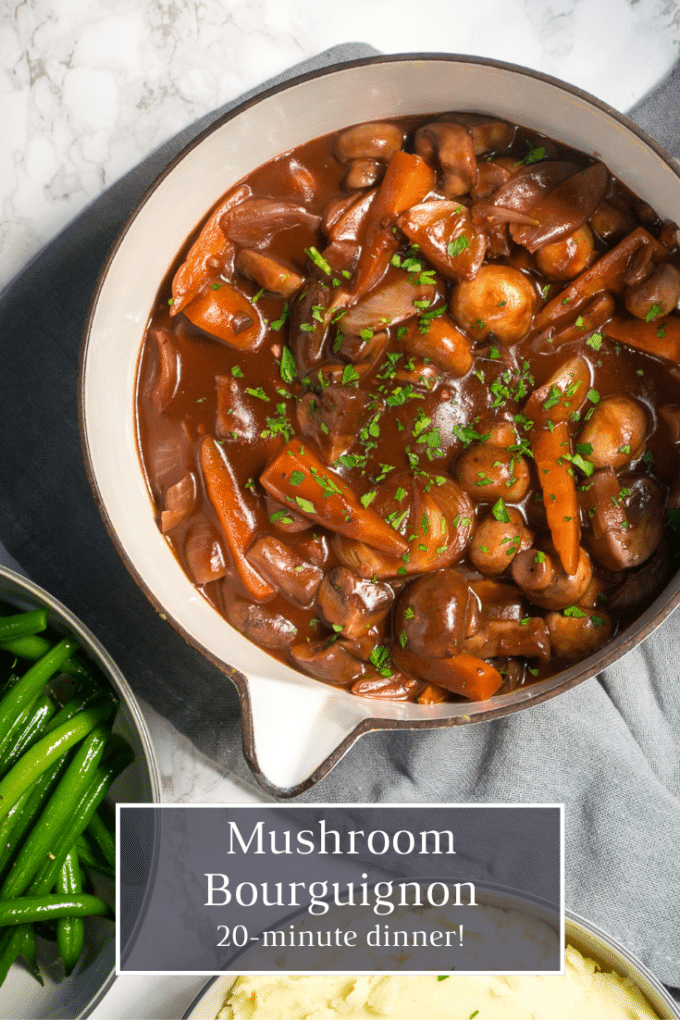 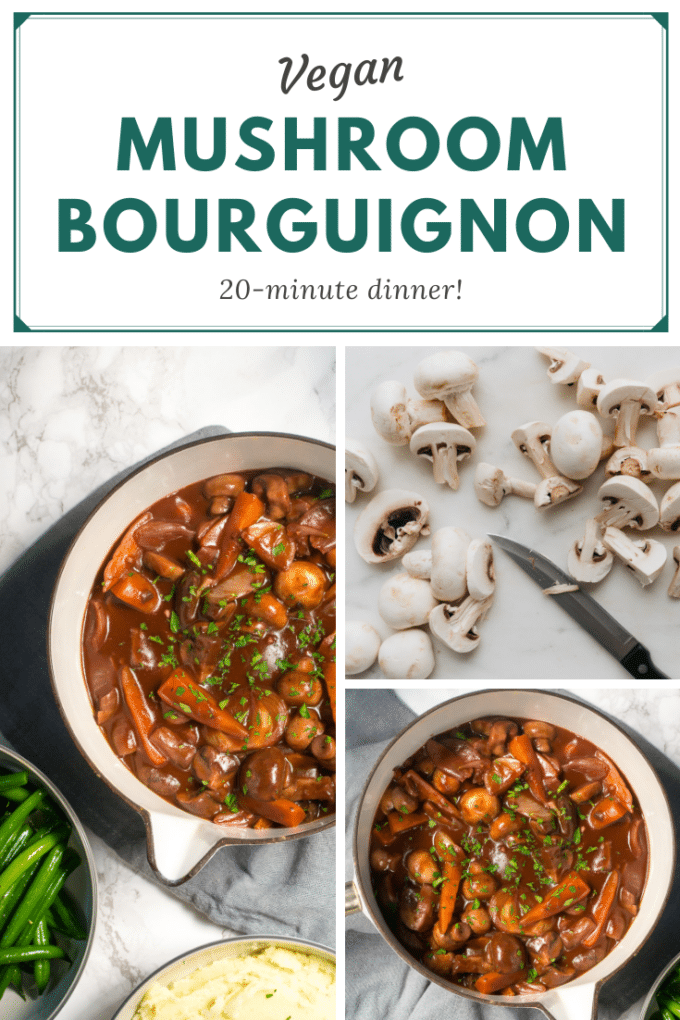 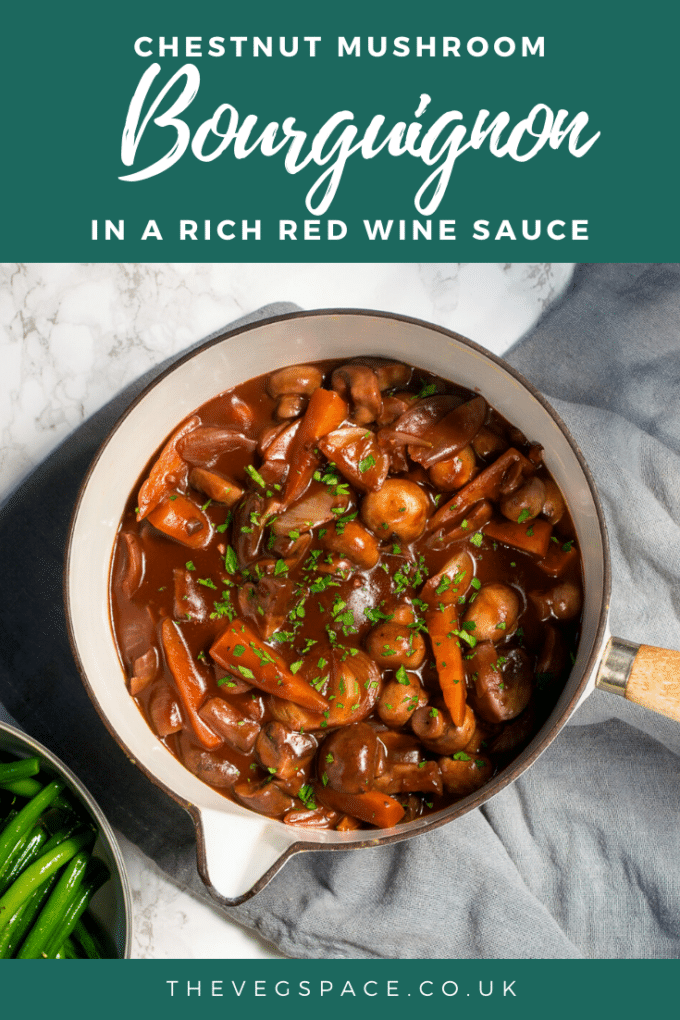 This juicy mushroom bourguignon in a rich red wine gravy is hearty and delicious comfort food, perfect with mash and green beans.

🍴 Why you will love this recipe

Juicy chestnut mushrooms cooked in a rich and glossy red wine gravy... this bourguignon is a warm, comforting dinner which has the added bonus of leaving two thirds of a bottle of red wine going spare for a cozy night in.

Cooked from scratch in just 20 minutes, you won't believe how quick and easy this is to make. The delicious gravy tastes restaurant-quality. Just as good for a fancy dinner party as for a cozy weeknight supper.

How about serving it with mashed potato spiked with wholegrain mustard? Or for a protein boost, try butterbean mash instead.

Or turn your mushroom bourguignon into a showstopping Sunday lunch by covering it with puff pastry to make a rich red wine pie.  You could even add a mashed potato topping instead, to create a rich and boozy 'posh' Shepherds' Pie. Yum!

Mushrooms (obviously!). I've specified both chestnut mushrooms, because they really keep their texture when cooked, and don't tend to shrink to nothing like other mushrooms, and also button mushrooms as it it lovely to bite into a whole baby mushroom here and there.

But do experiment - if you're entertaining and can stretch the budget a little, mixed wild mushrooms would be a real treat too. How about trying a mixture of oyster, forestiere, chanterelles or girolles which are often available in supermarkets these days?

Shallots I used the small, round shallots, which I left in halves or quarters, cutting straight through the root end to keep them fairly in tact so they add texture as well as flavour to the dish. If you can only get hold of the bigger 'banana' shallots then use 2 rather than the 4-5 specified, and slice them into thick rounds instead. And if you're using an onion, just one small one will do and slice thickly.

Baby carrots The little chantenay carrots are perfect here - they look so pretty sliced lengthways in half or quarters, and retain their bite due to the relatively short cooking time, which is just what you need alongside the soft mushrooms.

Red wine Never cook with a wine you wouldn’t drink! There’s no point in paying a fortune for wine that’s going to be bubbled down in your bourguignon, but equally if you have a bottle that’s been sitting half-empty on the worktop for over a week, it will ruin your supper! A medium-bodied red will go well with these flavours – not too heavy but reasonably acidic. something like a Cabernet Sauvignon would be excellent.

⭐️⭐️⭐️⭐️⭐️ "I am making this right now for the second time in 2 weeks. It is so simple to make, I never knew I could cook something so nice. I would be happy to be served it in a restaurant! If you haven’t tried it yet I highly recommend." Helen

⭐️⭐️⭐️⭐️⭐️ "I have just demolished a bowl of this. Tried a different recipe a few weeks ago which was rubbish, very little taste. This is gorgeous. Even my notoriously hard to please sister loved it. I only wish id have had some crusty bread in to mop up the rich, glossy gravy." Marie

⭐️⭐️⭐️⭐️⭐️ "I’ve just made this Chestnut Mushroom Bourguignon and it was awesome. I’m not vegan or vegetarian but this was such a delicious recipe, I’ll definitely be making it again." Janice

⭐️⭐️⭐️⭐️⭐️ "One of my favourite recipes to convince meat eating friends that the meat isn’t what gives the flavour. Next level!" Steff

Don't be tempted to chop the mushrooms too small You want big 'meaty' chunks to give a delicious texture to this dish.

Adjust the consistency of the sauce before serving If it is too runny, keep it bubbling over a high heat for a few more minutes until it is thick and glossy. If it is too thick, add a splash of water and stir through.

Taste the carrots before serving They should be 'al dente' - just tender but keeping their 'bite'.

Can I freeze my Mushroom Bourguignon?

I don't really recommend freezing this, because the texture of the mushrooms will be changed in freezing. They become a bit slimy and spongey, and as they are the star of the show in this dish it really isn't great. If you do want to batch-cook to freeze you could use something like borlotti beans, lentils or soya chunks in place of the mushrooms which will freeze more successfully.

Can I prepare this in advance?

Again I think this bourguignon is at its best when served immediately - the texture of the mushrooms is really key to the dish, and they are perfect straight from the pan. As it is such a quick dish to cook, you can certainly chop and prepare all the ingredients ahead of time, but I recommend cooking just before serving.

What can I serve with my bourguignon?

I love this dish served with Vegan Dauphinoise Potatoes for a really lavish supper, or sometimes a baked potato, or just steamed green vegetables. You can also turn it into a pie by adding a puff pastry crust on top and baking in the oven for 20 minutes.
This is delicious served with mashed potato spiked with wholegrain mustard, or for a protein boost, make butterbean mash instead.

What else can I make with chestnut mushrooms?

Here are a few chestnut mushroom recipes from blogging friends which might be of interest:
Chris' Marinated Mushrooms with Crispy Croutons and Sage from Thinly Spread looks fabulous!
Jac's Creamy Chestnut Mushroom Pasta Salad from Tinned Tomatoes... yum!
Chris' Papperdelle with Squash, Chestnuts, Mushrooms and Sage is delicious, with both chestnuts and chestnut mushrooms!
...or one of my most popular recipes, Creamy Mushroom One-Pot Gnocchi would be wonderful with chestnut mushrooms too. 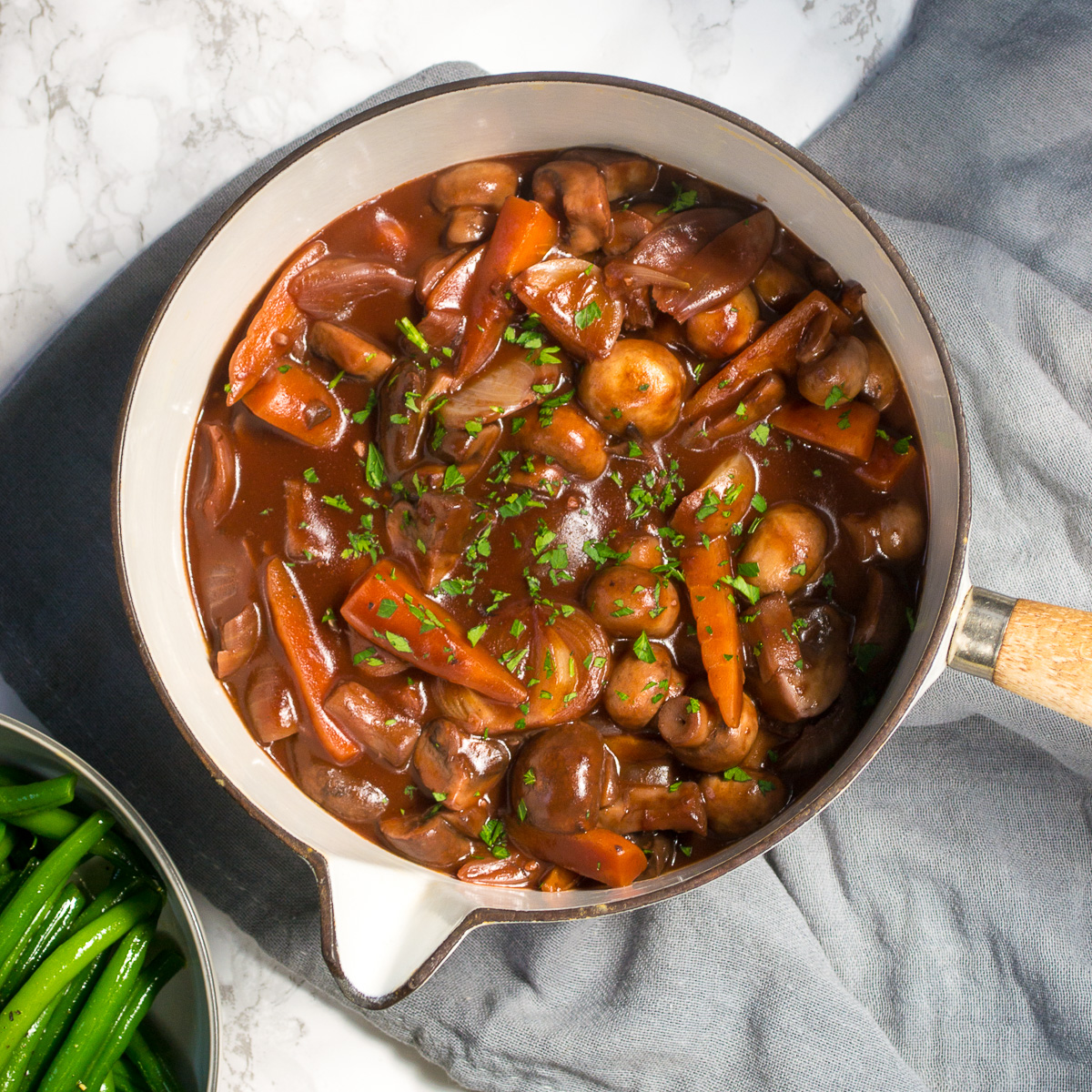 Don't be tempted to chop the mushrooms too small You want big 'meaty' chunks to give a delicious texture to this dish. Adjust the consistency of the sauce before serving If it is too runny, keep it bubbling over a high heat for a few more minutes until it is thick and glossy. If it is too thick, add a splash of water and stir through. Taste the carrots before serving They should be 'al dente' - just tender but keeping their 'bite'.