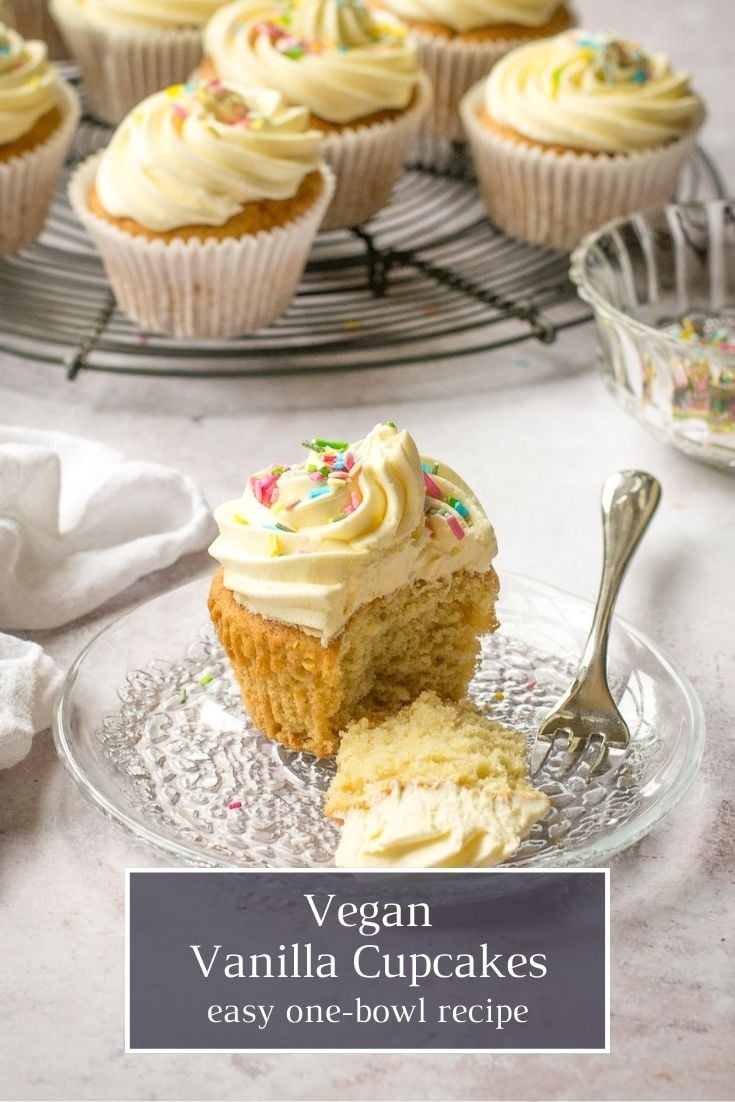 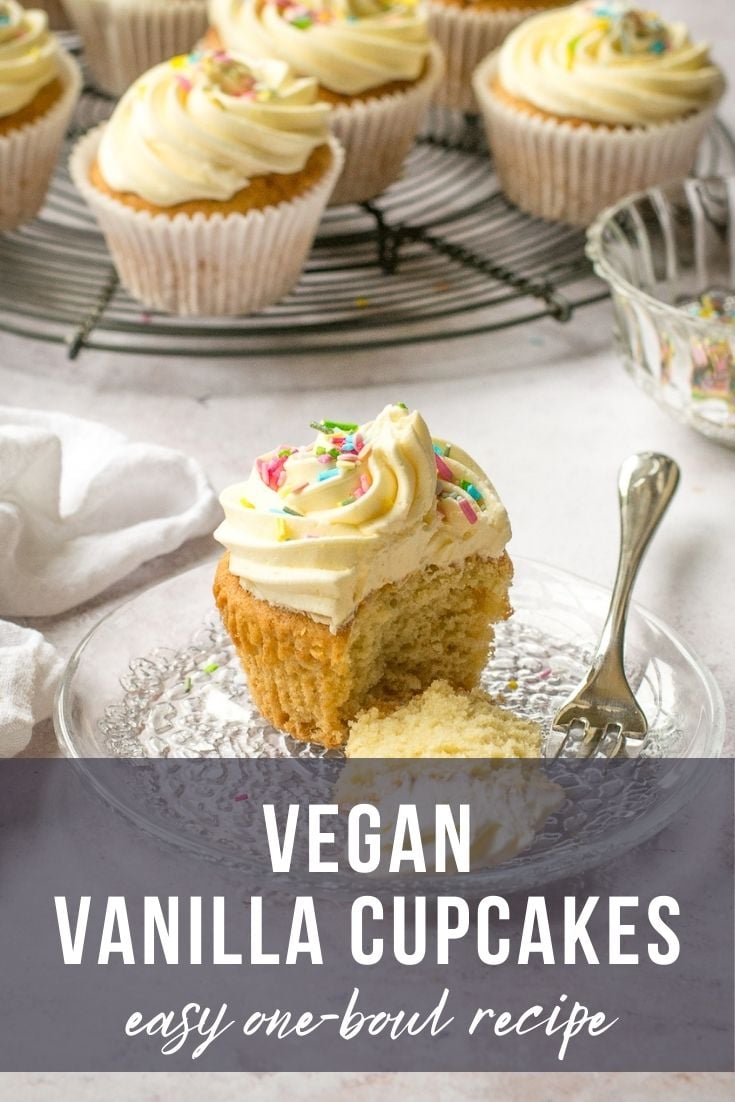 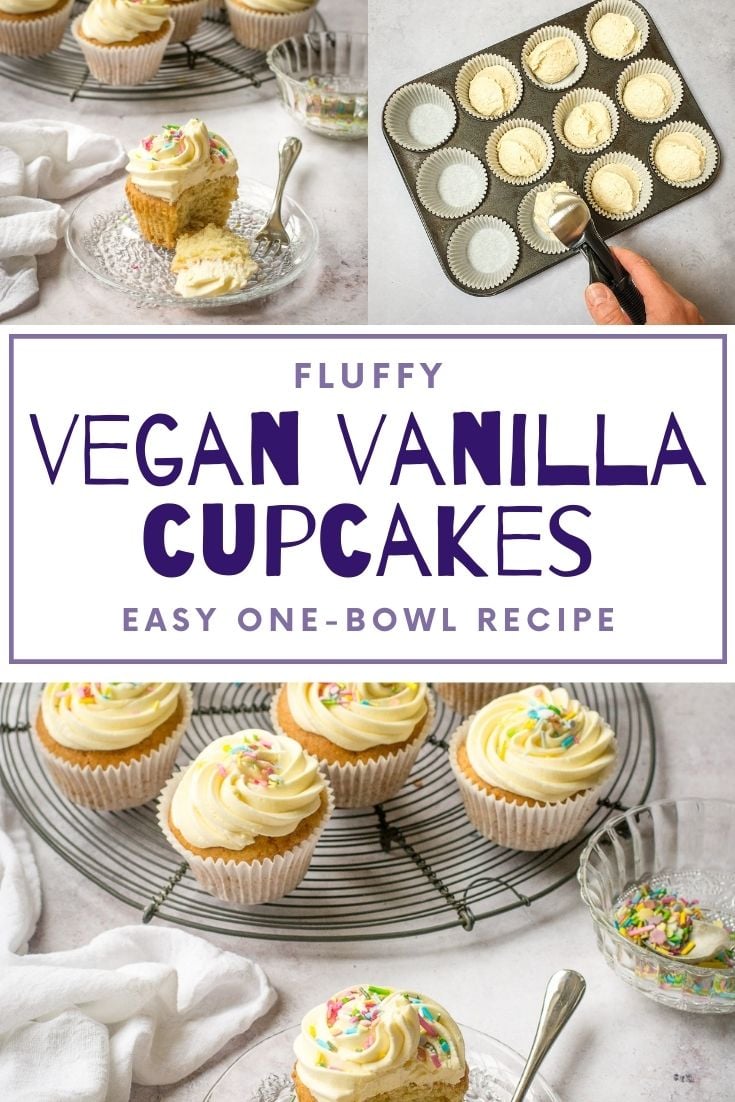 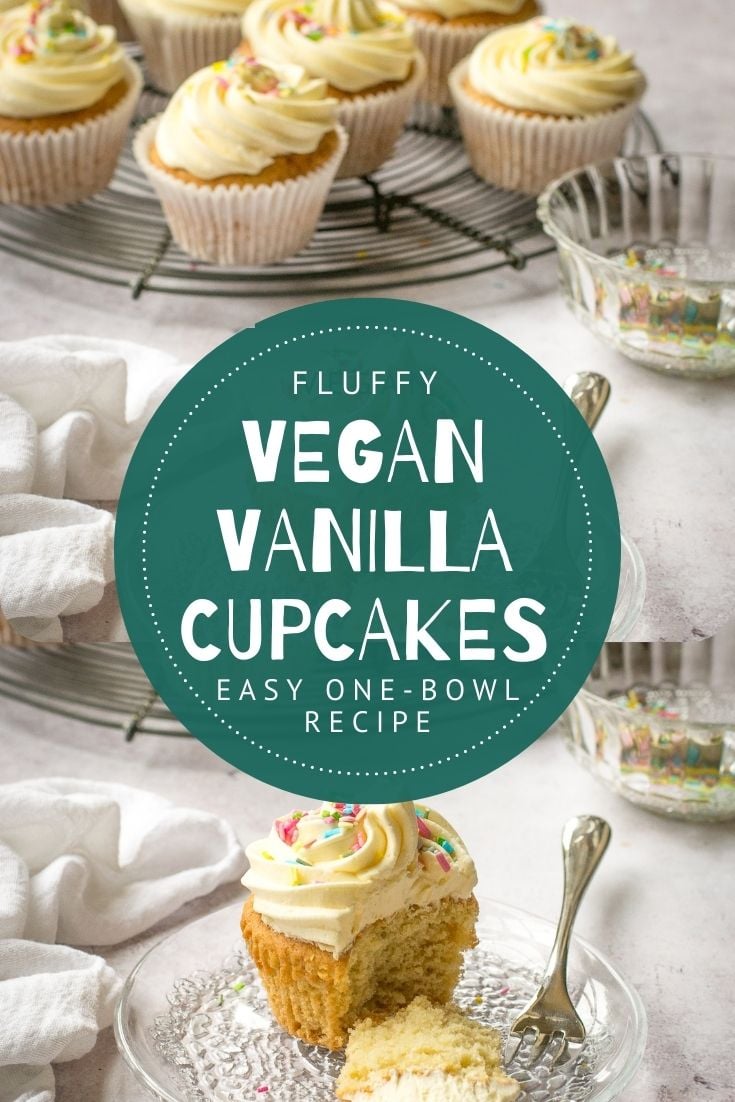 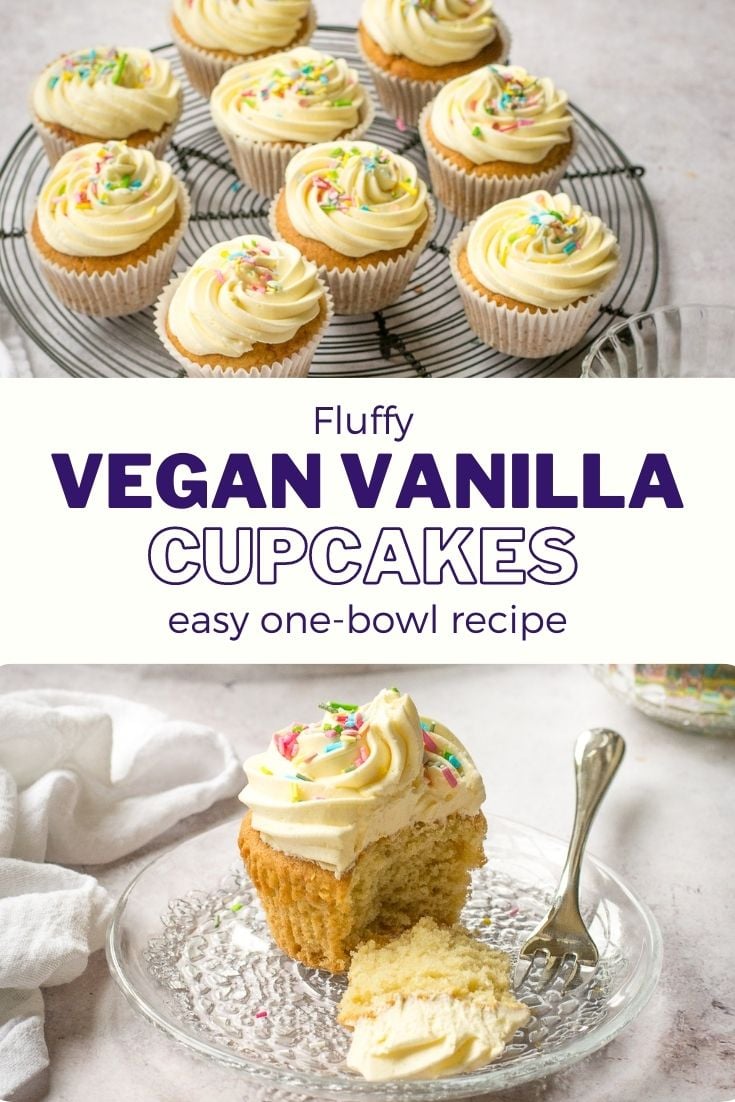 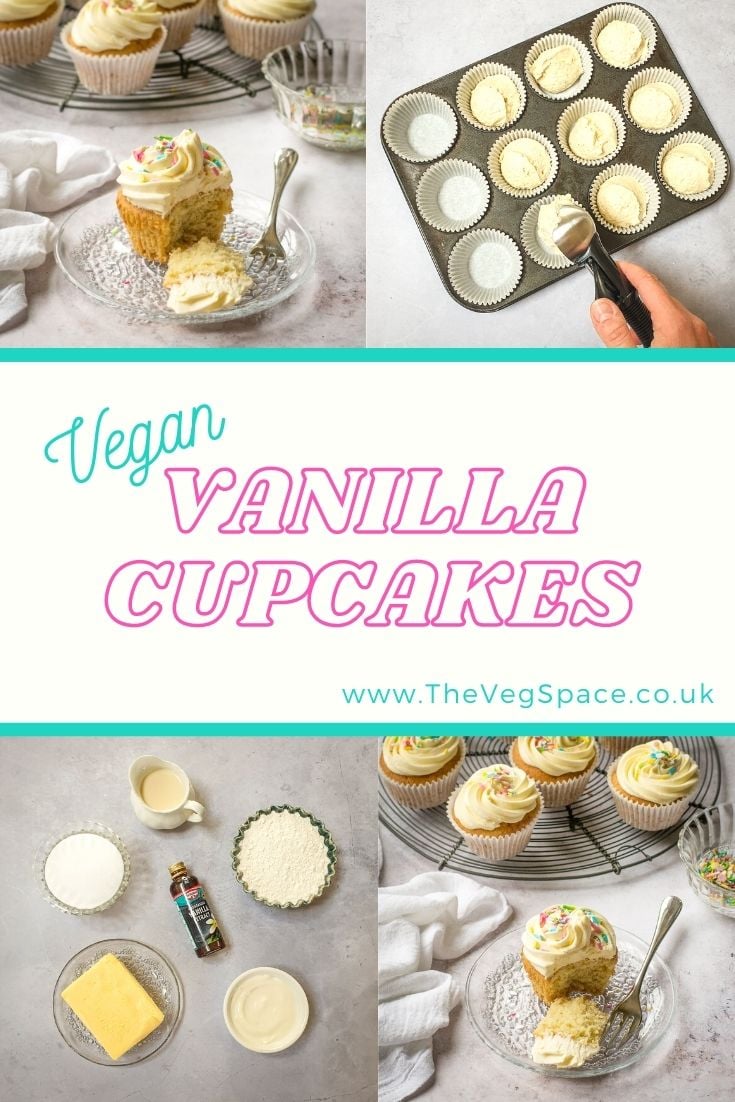 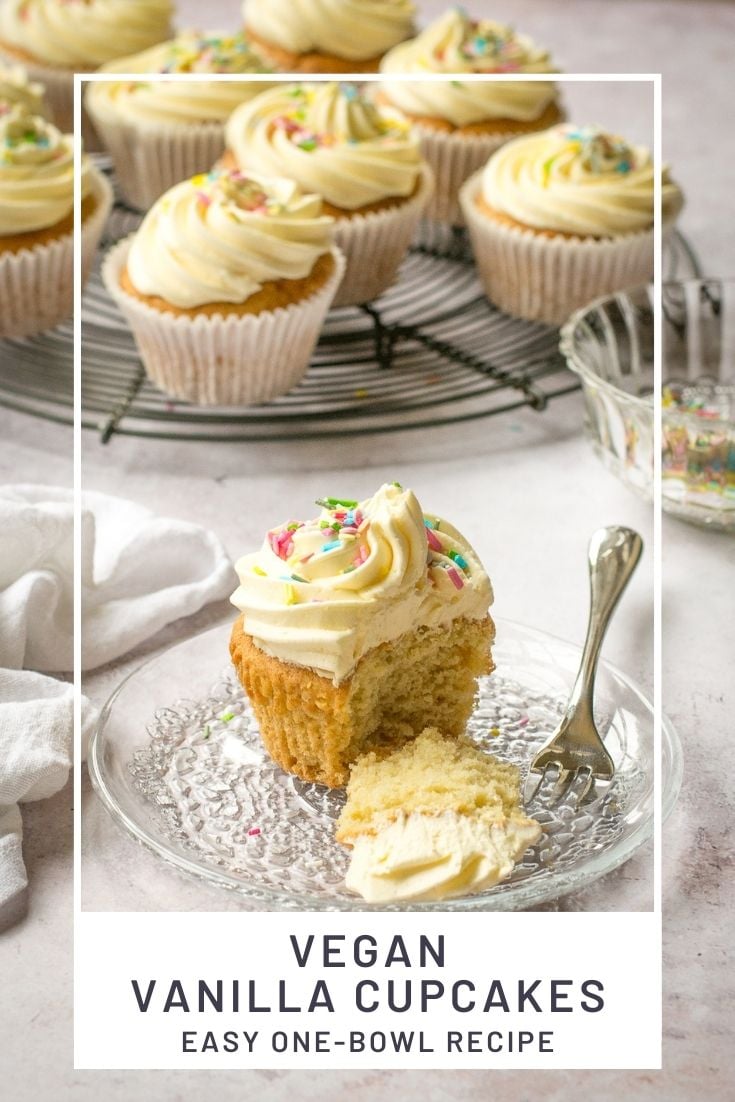 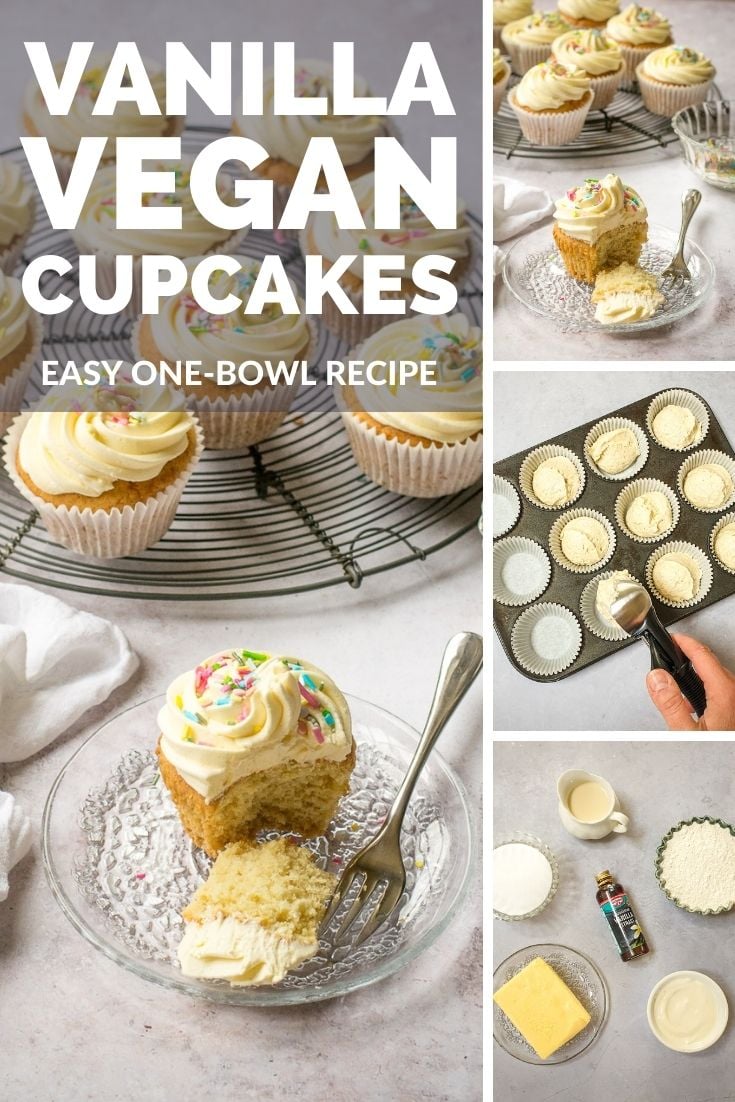 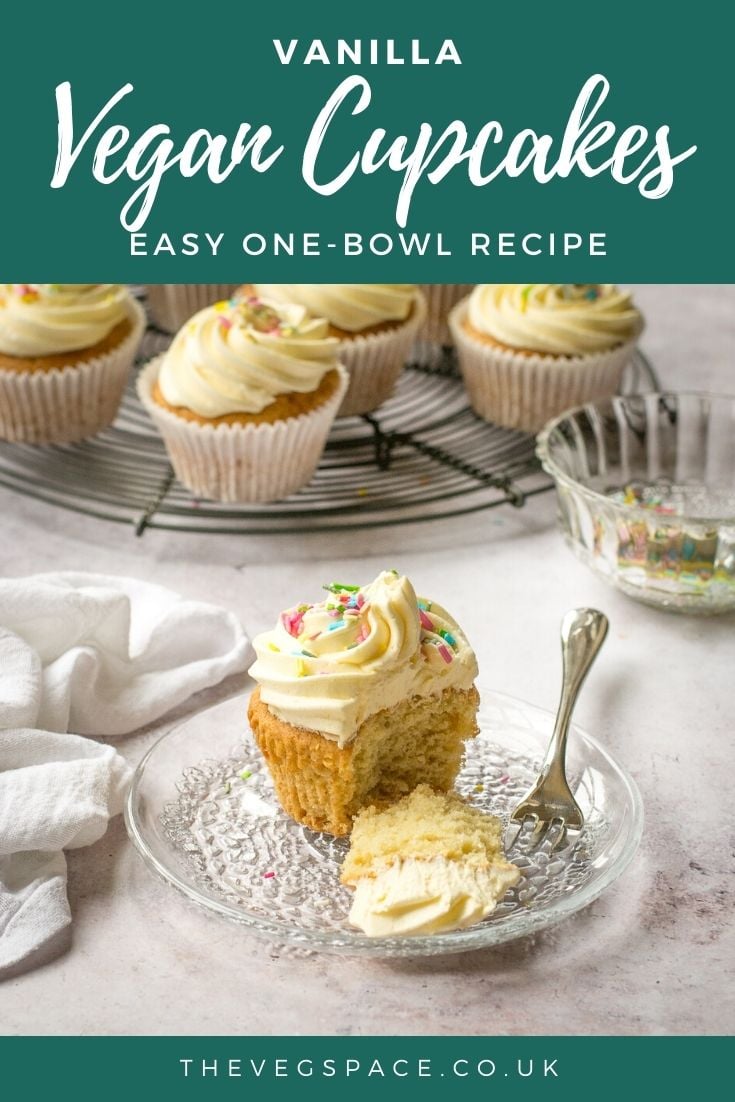 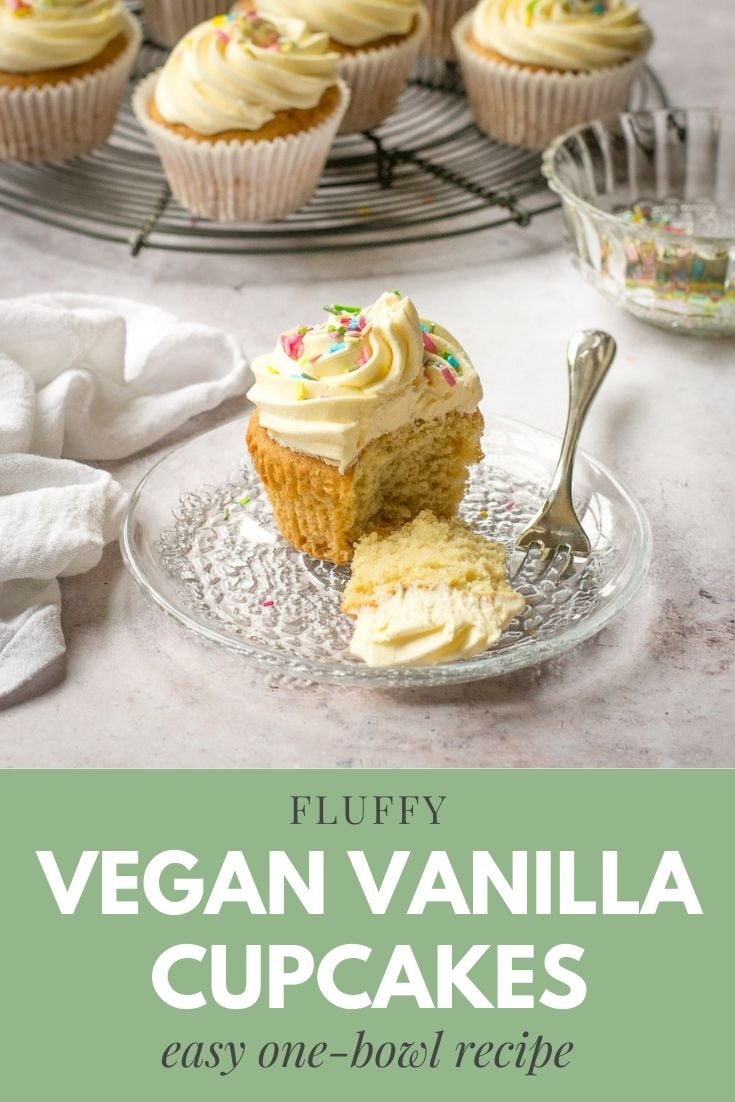 These light and fluffy vanilla vegan cupcakes are so good no one will ever guess they are vegan! Topped with a generous swirl of vegan buttercream.

🍴Why you will love this recipe

So it seems you're all hungry for vegan cake recipes, (and I don't blame you!) - my Vegan Victoria Sponge, Vegan Coffee & Walnut Cake and Vegan Carrot Cake are consistently amongst my most popular recipes.

So here's a recipe for some in incredibly light, moist and fluffy Vanilla Vegan Cupcakes.  These taste every bit as good as they look - fluffy, moist and piled high with buttercream - no one will ever guess these are vegan.

A combination of vegan yoghurt and plant milk replace the eggs.  It sounds weird I know, but it works so well! And of course vegan block margarine is a super-simple butter replacement both in the sponge and in the buttercream.

Dairy-free margarine Make sure you use a good-quality block margarine, rather than a tub of spread. My favourites are the new Flora Plant Butter or Naturli Block. A block margarine has a far lower water content than spread, which is so much better for baking.

Dairy-free yoghurt I use unsweetened soya yoghurt for baking - it has a much higher protein content than other plant yoghurts, so is the best egg replacer. However if you can't or don't want to use soya, a good unsweetened oat or coconut yoghurt will also work well.

Dairy-free milk Again, I use unsweetened soya due to its protein content, but any oat or nut milk will work well.

Self-raising flour If you don't have any self-raising flour to hand, don't panic - you can make your own! Just use 300g plain flour with 4 teaspoon baking powder. (You will still also need the bicarbonate of soda listed in the recipe).

👩🏽‍🍳 How to make your vegan cupcakes

For a full, printable recipe with ingredients and detailed instructions, scroll to the bottom of this page 👇🏼.

Beat together the vegan butter and sugar until pale and fluffy. Mix together the dairy-free milk, vegan yoghurt and vanilla extract and stir through the 'butter' and sugar.

Add the flour and bicarbonate of soda and mix slowly until just combined. Divide the mixture between 12 cupcake cases and bake for 15-18 minutes.

Beat together icing sugar, vegan butter, dairy-free milk and vanilla extract until soft and fluffy. Pipe or spread over each cupcake and decorate as required.

Before icing, store the cakes overnight in an airtight tin or tupperware. The moisture from the middle of the cake works its way to the edges and the whole cake becomes moist and soft, and the crispy edges turn deliciously soft.

Beat lots of air into your 'butter' and sugar. It is tempting to mix the butter and sugar until they are, well, mixed. But in fact you want to mix them long and hard until they are pale, soft and fluffy - I leave the mixer on for 2-3 minutes at this stage, which feels like an age, but the results are worth it.

Use good quality ingredients. I've mentioned above about block margarine - that will make a big difference. But also make sure everything is fresh and in date. Did you know that bicarbonate of soda and self raising flour have use-by dates? Their efficiency at giving your cakes their rise drastically reduces after that time, so chuck out that decade-old bag of flour lurking at the back of the cupboard!

Can I freeze my vegan cupcakes?

Yes, the cakes themselves freeze well but the buttercream doesn't, so you can make the cakes well in advance, then just defrost and add the icing on the day you serve them.

How long do these cupcakes keep for?

If kept in an airtight container these vegan cupcakes will be fine for 2-3 days. They are very moist and soft so don't dry out.

What is a vegan cupcake made from?

Vegan block margarine replaces the butter in both the cake mix and the buttercream, and a mixture of dairy-free yoghurt (soya or oat) and dairy-free milk (soya, oat or nut) replaces the eggs. These replacements work so well that vegan cupcakes taste almost identical to non-vegan. 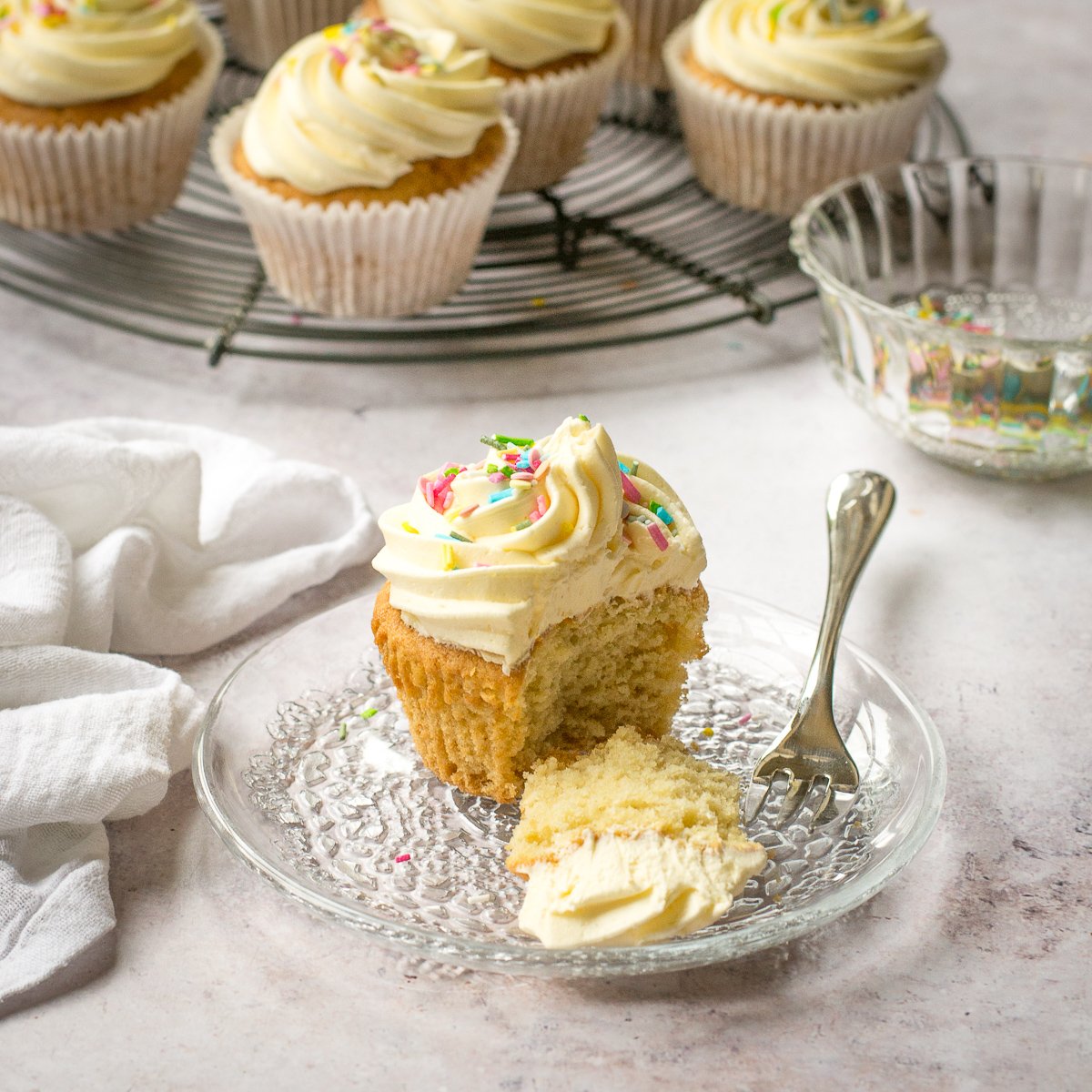