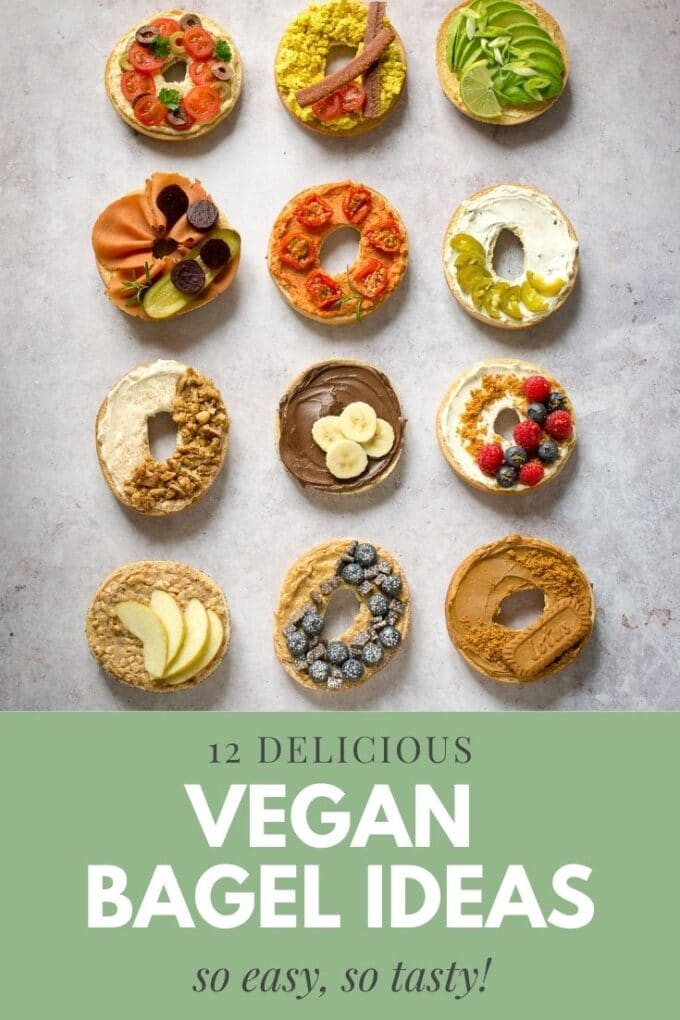 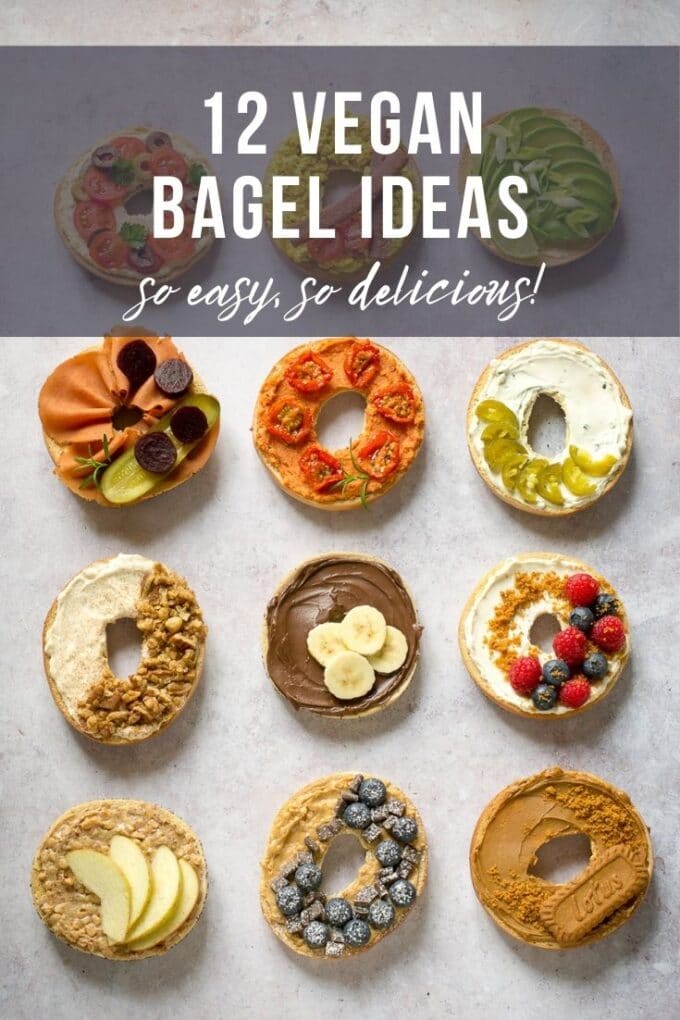 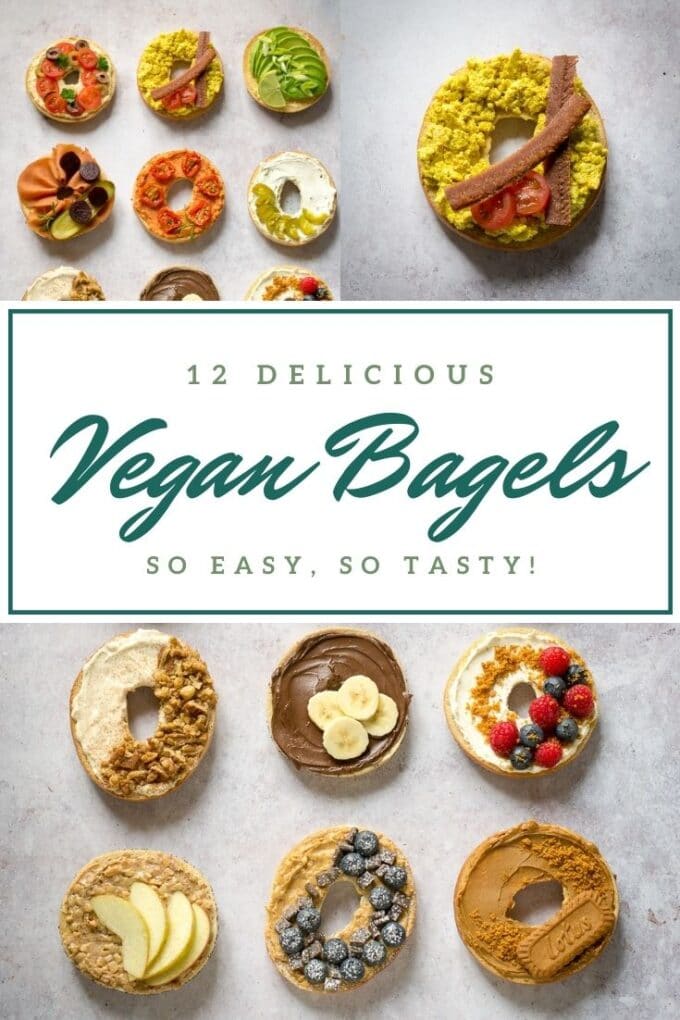 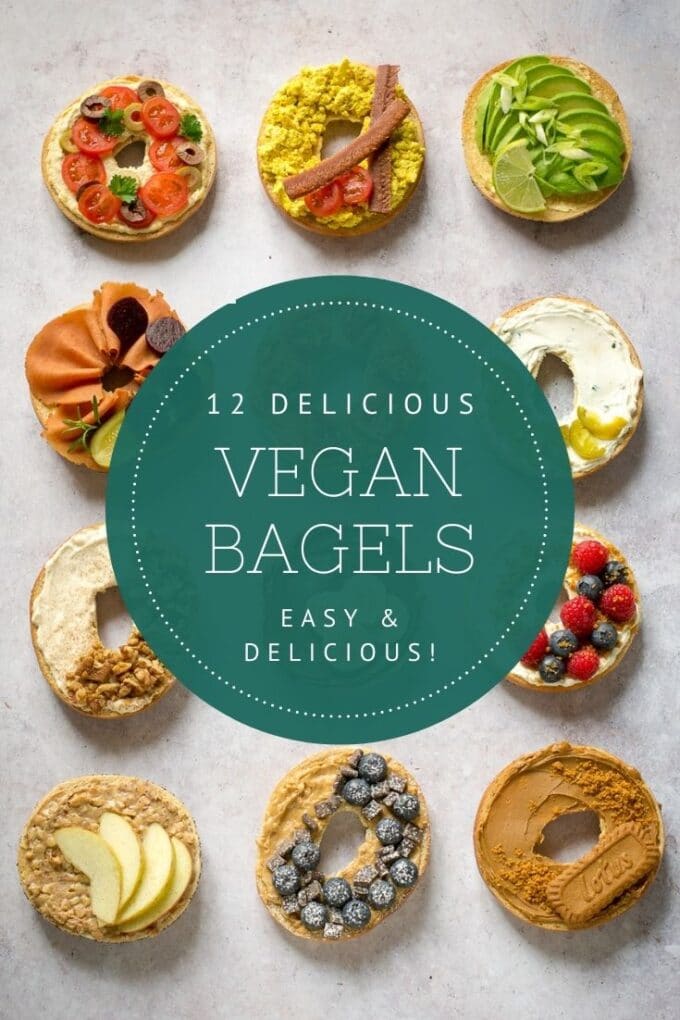 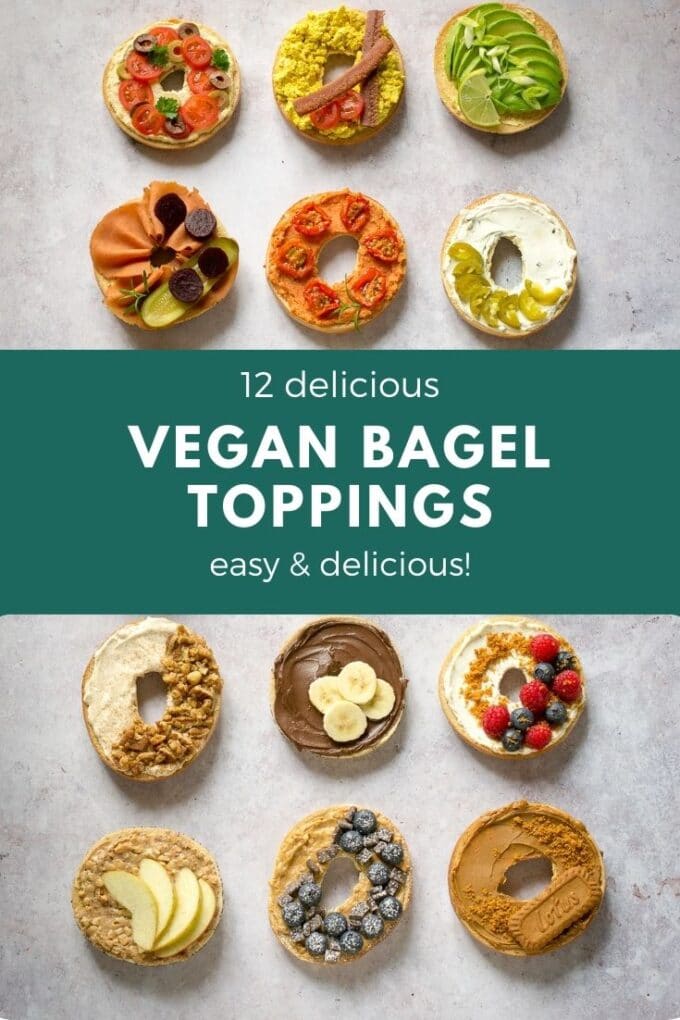 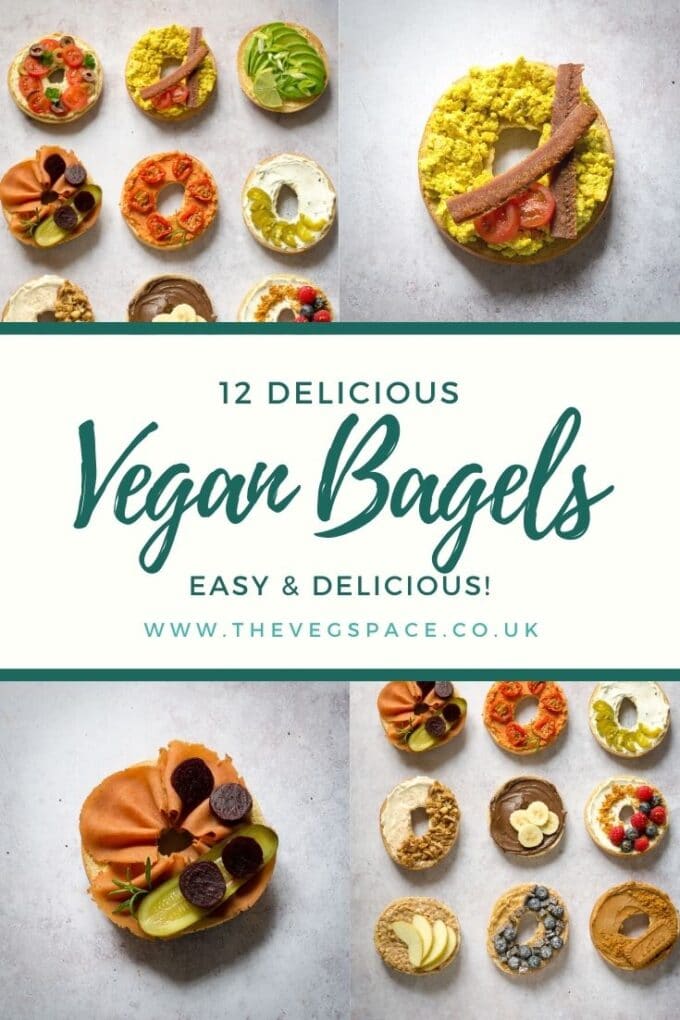 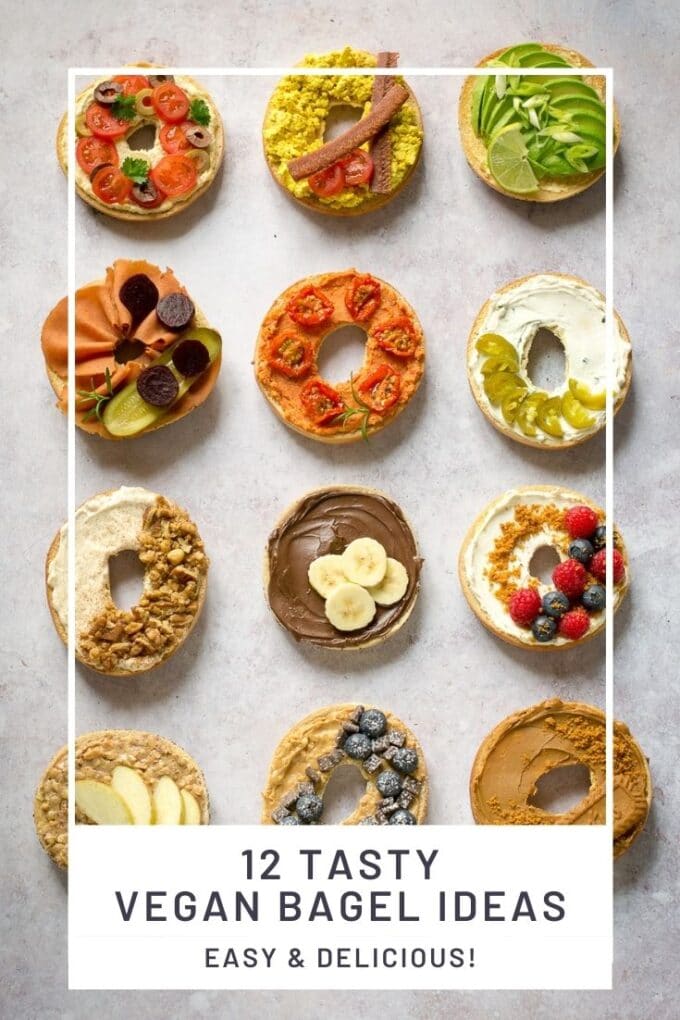 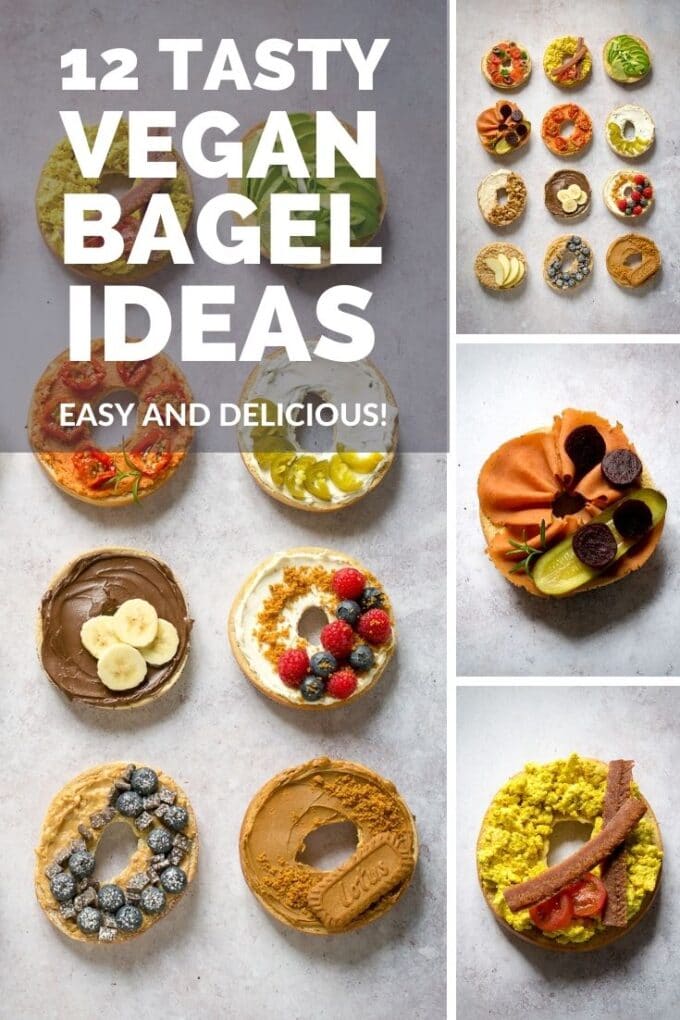 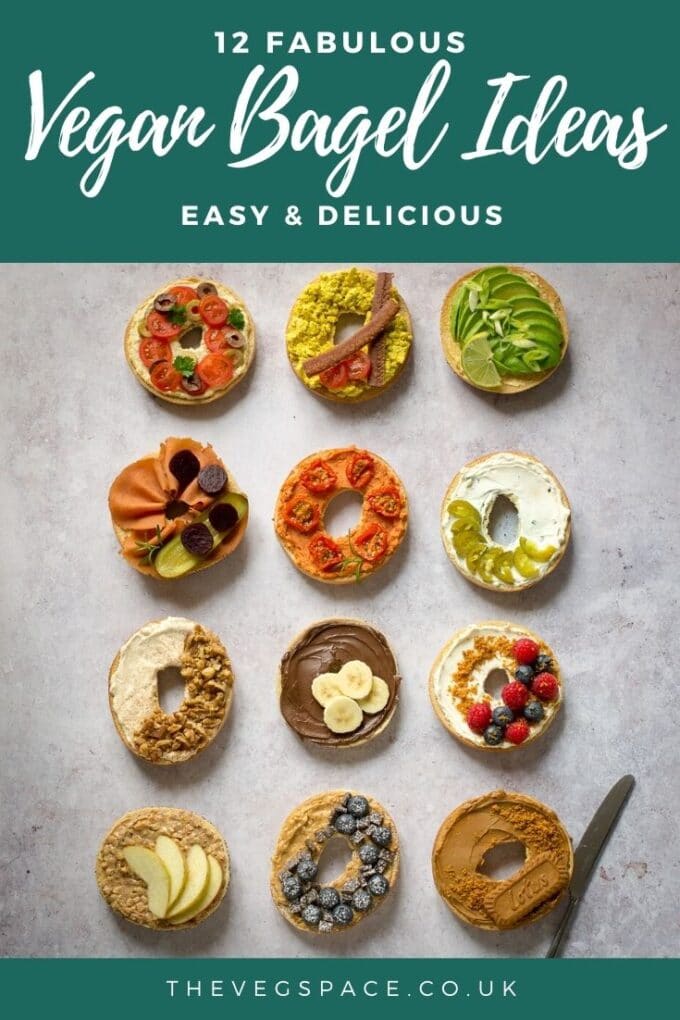 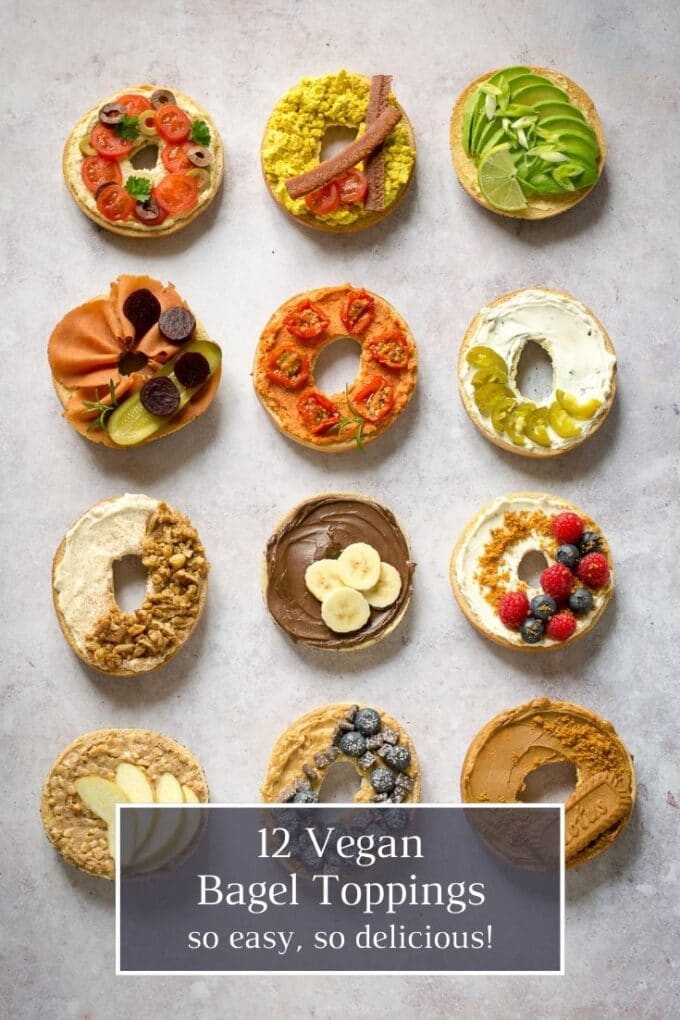 These delicious vegan bagels are easy but packed with flavour. Twelve tasty toppings - both savoury and sweet.

Imaginatively-topped bagels are always near or at the top of my ideal lunch league table. (And yes, I do spend far too much time thinking about the merits of jacket potatoes vs. crusty rolls, etc.).

These twelve tempting bagel toppings are just so delicious and easy to throw together in a hurry. Which will you try first?

There are six savoury and six sweet bagel ideas - why not try half a bagel with a savoury topping and half sweet?!

Each vegan bagel idea is outlined below, then there's a printable recipe at the bottom with the ingredients for all the fillings, if you want to keep it handy.

This protein-packed bagel is spread with a tomatoey butterbean pâté which you can whizz up in a blender, food processor or mini-chopper in just 3 minutes. Find the recipe here: Sun-dried Tomato Vegan Pâté.

You can then top it with either sun-blush tomatoes from the chiller cabinet which are really delicious, or thinly sliced sun-dried tomatoes from a jar.

Finely slice half an avocado and squeeze over the juice of half a lime. Season generously with salt and black pepper, then sprinkle with finely sliced spring onion.

This delicious breakfast bagel is topped with tofu scrambled 'egg' and vegan bacon.

For the scrambled 'egg' see my Vegan Scrambled Egg recipe, which takes just a few minutes to prepare and cook.

Then, fry a couple of slices your favourite vegan bacon, (I love This Isn't Bacon which I used in this photo, or Quorn's Vegan Smoky Ham slices fried for a minute until crispy.

Finish with a halved baby tomato and a generous season of salt and black pepper, and enjoy!

Straight out of a New York deli, this delicious vegan pastrami, gherkin and beetroot bagel is a winner.

I like Squeaky Bean's Pastrami which is quite widely available, or any similar plant-based ham.

Top with a few gherkins, and some baby cooked beetroot, (I used chilli beetroot for an extra kick!).

A straightforward bagel that's packed with protein. Start with your favourite hummus, (shop bought or make your own - try my Butterbean Hummus or Roasted Garlic Hummus).

Top with sliced tomatoes and mixed olives, a grind of black pepper and some fresh parsley. Delicious!

All the loveliness of a jalapeño popper, on top of a bagel!

I've recently fallen in love with a vegan cream cheese called Nush* - look out for it in supermarkets. Simply spread with cream cheese and top with as many jalapeños from a jar as you can handle! Phwoar.

Once again I used lovely Nush cream cheese (plain one this time) to start this very berry vegan cheesecake bagel, but of course use any plant based cream cheese you have handy.

Top with biscuit crumbs, (Hob Nobs, digestives - check they are vegan, or Biscoff biscuits are all brilliant here).

There are love of lovely new vegan chocolate spreads around at the moment. I love the M&S Plant Kitchen Chocolate Hazelnut Spread, but use whatever you can get hold of here, and simply top with sliced banana.

There's a brilliant episode of The West Wing where the President of the United States and all his senior staff are snacking on apples with peanut butter. And with good reason too - for a relatively healthy treat they are totally delicious!

Simply top your bagel with peanut butter and finish with thinly sliced apple. If you're preparing it a little in advance, toss the apple slices in a little lemon juice to stop them turning brown.

This needs no introduction - if you've seen my Vegan Biscoff Cheesecake recipe you will understand my passion for this biscuity spread.

To make the crumbs, just bash a biscoff biscuit in a small bowl or pestle and mortar, or just crumble it with your fingers.

If you can't decide what to have for breakfast, combine three breakfasts into one - simple!

A thick, greek-style coconut or other plant-based yoghurt, sprinkled with your favourite granola and finished with a pinch of cinnamon.

Last but by no means least.... my kids declared this their favourite after much deliberation.

I hope those have given you some good vegan bagel ideas - please leave a comment with your own ideas below.

Please do save these vegan bagel ideas on Pinterest --> --> --> Sharing my posts helps me to keep creating free vegan recipes!

I love hearing from you! Do send me pictures of your very own vegan bagels on:

IF YOU LIKED THAT... 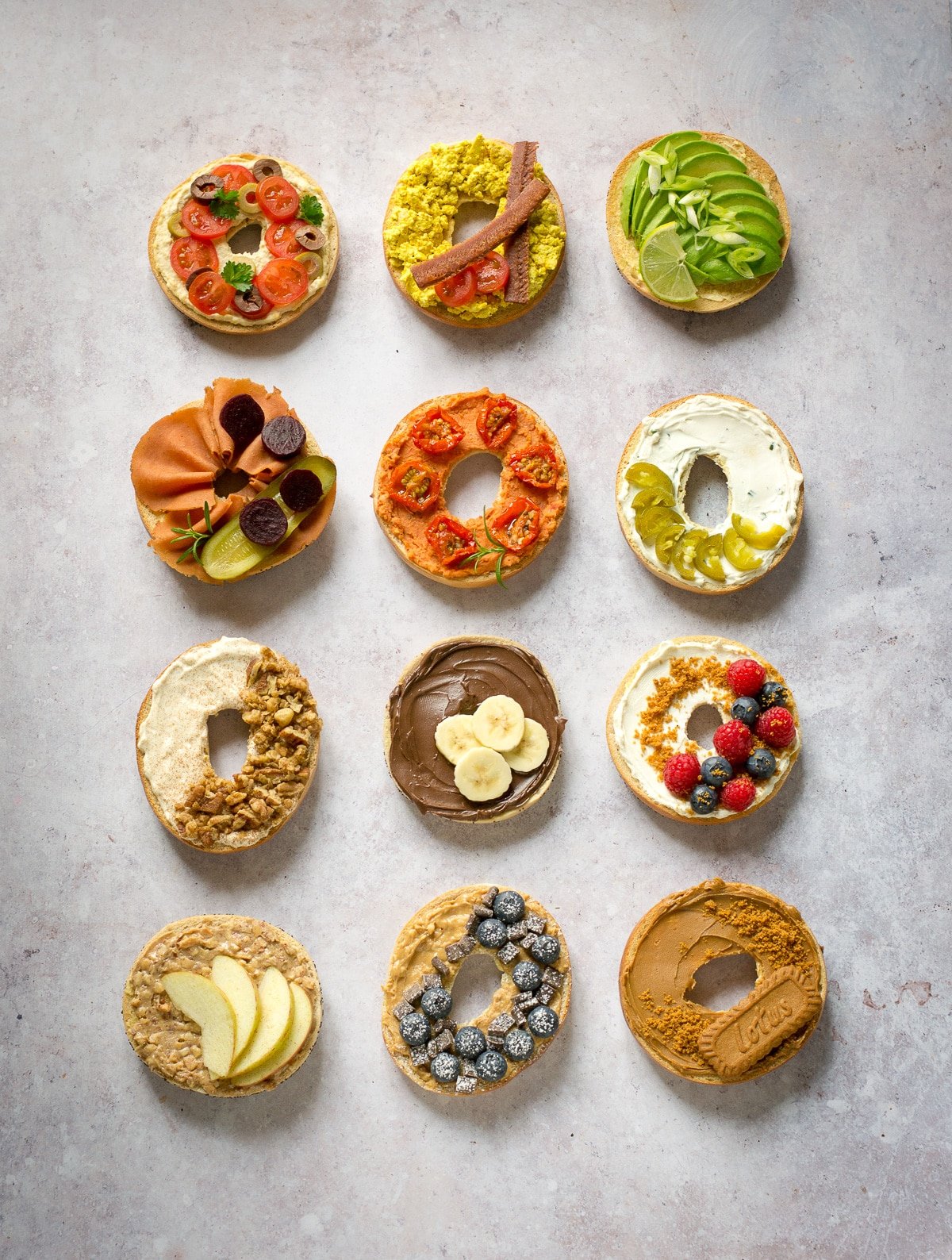 Tried this recipe?Let us know how it was! Mention @thevegspace or #thevegspace
SHARE BY EMAIL SHARE TO FACBOOK
« Shiitake Mushroom Noodle Soup with miso and pak choi
Swiss Chard Curry with potato & lentils »